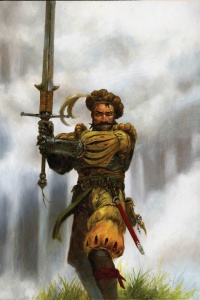 A Greatsword of the Empire.

Greatswords are elite infantry troops of Imperial armies. They are the bodyguard of Elector Counts and other Empire Generals. Greatswords are named for their great swords (massive two-handed swords) and wear full plate armour.[7b]

They are among the finest Imperial warriors available. Unlike the aristocratic members of the knightly orders, a Greatsword is a man plucked from the ranks due to some extraordinary feat of arms and bravery. That being said, an especially heroic Greatsword may be knighted by their Elector.[7b] Many men have died attempting to achieve the respected position of Greatsword. On one occasion during the Battle of Blood Ridge, Albrecht Hoefner the last survivor of von Menscher's Black Helms received a promotion after defending his regiment's colours for an entire day against attack from tribesmen and Beastmen.

Their prowess is indicated by their primary weapon and namesake, a massive sword requiring two hands to wield. Charged with protecting the lord who raised them to Greatsword, they form a bodyguard of stubborn, resolute men of the finest character, protected by Dwarf-forged plate armour. The history of the Empire is full of tales of a final stand by the Greatswords of the Empire.[7b]

Imperial Greatswords are based heavily on the Landsknecht, Renaissance-era mercenary footsoldiers and pikemen, particularly the Doppelsöldners, who often wielded two-handed swords.