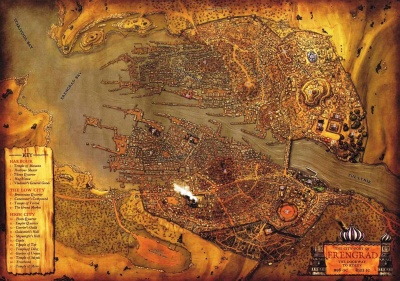 Erengrad is one of Kislev's three largest cities. Located on the coast of the Sea of Claws, it is the country's major seaport. [1a]

The city is built at the head of the river Lynsk, within a huge lagoon that shelters it from the cold sea and the flesh-melting winds of Chaos that blow from the north. The docklands are built on a sizeable island, connected to the main city by a fabulous timber bridge. The city is protected by walls of solid timber, and from its great bronze gates winds a single dangerous path towards the city of Middenheim in the Empire.

Each year the Kurgan and Kyazak raid the lands of Kislev and each incursion is getting nearer and nearer to the surrounding settlements and suburbs of Erengrad. Nevertheless its defenders manage to push them back every year. [3a]

Over the last century or so, the guilds of the city have been growing steadily more powerful and important with the boyars distanced themselves from the details of trade. The guilds eventually accepted more direct control from the Tzarina in return for increased powers over the city and have begun to steadily supplant the boyars in government but the boyars do not particularly like being brushed aside. [1b]

The city was formerly named "Norvard", being the capital of the Ungol people. It was the largest city of the region and was later conquered by the Gospodars under the first Tzarina, Shoika and renamed Erengrad.[1b] With the regular transit of ships bringing trade goods from the Old World, Norsca, and even from the New World, the city slowly grew both in size and importance becoming an important centre of international trade. [1a][1b]

A Norse Dwarf merchant ship from Kraka Ravnsvake vists in 1607 IC. [5a]

The vast army of Archaon attacked the city but it held for seven dyas and nights despite the bombardment of a dozen Hellcannons. When the final assault was launched the defenders took a heavy toll of the attackers but the horde seemed unending. The northern gates were shattered and Archaon himself led his warriors into the city and as he did so, Norse Longships attacked the harbour bringing boatloads of werekin into the battle. The city was brutally sacked, the city levelled and thousands of inhabitants killed before the Chaos horde moved on. [4a]

Rebuilding has proceeded more quickly in Erengrad than almost anywhere else with building materials scavenged from the ruins or brought in by traders. Both the guilds and boyars had grand plans for redesigning the city, making it more beautiful and welcoming to traders but each started work on their own ideas. [1b]

Slaves, gems, and precious metals are common trade items here. Even though Kislev doesn't maintain a regular navy, many of the trade ships that come to Erengrad are armed and can be drafted into military service by the ruler of Kislev when needed.[1a] [2a]

Historically Pirates found it was much easier to sail to Erengrad than to pretend to be legitimate in order to sneak into other ports. [1b]