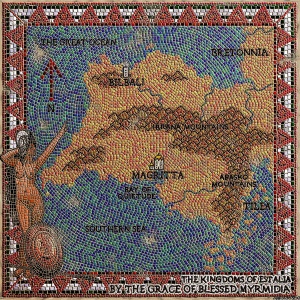 Estalia is a nation in the World that Was, politically divided into several small kingdoms and lacking a central government.[4a]

Estalia is bordered to the northeast by Bretonnia. Its natural borders are the Irrana and Abasko Mountains to the east, the Great Western Ocean to the north and west and the Southern Sea to the south.

The northern kingdoms of the Irrana mountains are barren lands populated by fierce and tough hill-fighters, and where solid fortresses guard the mountain passes, while the kingdoms along the south coast are prosperous trading states whose ships ply the Southern Sea as far as Araby. [4a]

Estalian cities are solidly built and well-fortified, and of a generally younger foundation than those of the north. The two largest cities, along with both being port cities, also represented the two most important and powerful city-state kingdoms. The rivalry between these two port cities - Bilbali on the north coast and Magritta on the south - and between each and their Tilean neighbours, for that matter - has endured for centuries. [4a]

Estalians claim to be the first humans to have settled in the Old World. [4a]

Estalia was invaded in 1448 IC by Sultan Jaffar of Araby. After its conquest, many Estalians were enslaved. However, Estalia was later liberated by a combined force of Imperial and Bretonnian knights.

In 1750 IC Nourgul a Necrarch Vampire Lord invaded and razed the lands between the Southern Sea and the Irrana Mountains, forcing the various princes to combine forces against him. However their combined forces were defeated in three successive battles, forcing the survivors to reteat to Magritta where they were beseiged. The city fell after a three month seige and Nourgul made for the temple of Myrmidia, slaying the priests when they tried to stop him. However on hearing a night piercing scream, the survivors emerged to discover that the undead had collapsed and the vampire mere ashes next to the alter of the goddess. [3a]

Shortly before the End Times, the Estalians established a colony by the name of Santa Magritta in Lustria.

However, by 2525, Estalia had been totally conquered and overrun by the Skaven.[2]

Situated far to the south of the Old World, Chaos was too remote to be taken as a serious danger. With no external threat to unite the people until it was too late, the region remained politically fractured, with rival kingdoms warring against each other, as well as against the neighbouring city-states of Tilea, the Arabians and the Bretonnians.[4a]

Estalians are a hardy people, and claimed to be the first humans to have settled the Old World, [4a] although this claim was not taken seriously outside Estalia. Those within the cities made their living with fishing and trade. [5a]

Estalians took great offence at being confused with Tileans, and it was said they would slay any man who mistakenly addressed them in the Tilean language.[5a]

Estalia was renowned for its Diestros, skilled duellists who plyed their trade across the Old World.