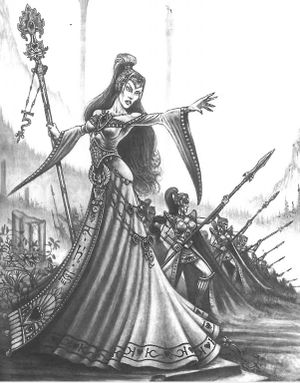 The Everqueen is one of the two joint rulers of the High Elves, seen by them as the symbol and incarnation of their mother-goddes Isha. [1a]

Unlike the Phoenix King, the Everqueen is always the Queen of Avelorn [1a] and the current Everqueen is Alarielle. [1c]

She and the Phoenix King are the rulers of Ulthuan. The court of the Everqueen lies deep in the forests of Avelorn although she is ritually crowned at the Shrine of the Earth mother on the Isle of Rebirth to the north of the Isle of the Dead in the Inner Sea. [1b]

The Everqueen holds a ritual year-long marriage to the Phoenix King and their first born daughter, the Everchild, will inherit her position. Afterwards both can take other consorts. This maintains the matriarchal line, stretching back to when Ulthuan was ruled only by the Everqueens, before the Coming of Chaos. Those who would be her consorts are often tasked with hunting down the creatures that inhabit the darker parts of her realm such as Giant Spiders. [1c]

The Queen and the king have in the past disagreed on policy, forming powerful factions. [1c]

There are hundreds of rituals the Everchild must undergoe to fully become the avatar of Isha and not completing them can risk madness as the power of the goddess flows into her. [2a]

Each Everqueen is attended upon and guarded by the Handmaidens of the Everqueen, also known as the Maiden Guard.[1c]

The line of Queens

Only a handful of the queens are known.