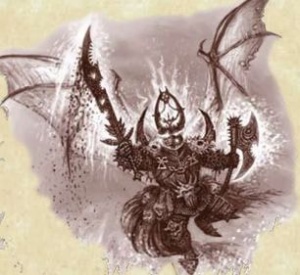 Exalted Champions are the mightiest of Chaos Warriors besides the fearsome Chaos Lords themselves.

The Exalted Champions are counted amongst the most powerful warriors of the Chaos Wastes. These foul, corrupt individuals are thoroughly the pawns of the Dark Gods and have little will of their own. They live to fight, and hate the Empire. They lead their armies across the war-torn lands, throwing themselves into the teeth of their enemies, fighting until nothing and no one remain. These individuals are as likely to slay their allies as their enemies as they respond to the capricious whims of their foul masters. It is from these few Chaos Champions that the Ruinous Powers select the next Lord of Chaos who leads the armies of Chaos Undivided into battle against their enemies.