Fellowship of the Shroud 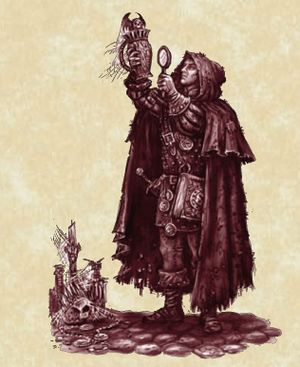 Agent of the Fellowship

The Fellowship of the Shroud is a order of Morrian Vampire hunters. [1a]

The fellowship is made up of people who have survive what should have been a fatal encounter with the Undead and now have pledged their life to fighting against the scourge. Within the Order, the members are known as Companions and they live a monastic, ascetic life when not not acting against the enemies of life. [2a]

However the Cult of Morr does not sanction the Fellowship and they receive no offical support from the hierachy of the church - indeed on several occassions they have petitoned the Emperor to ban them from the Empire. [2a]

The order has chapterhouses in various nations includng the Empire where they have strongholds at Essen and Siegfriedhof. The Fellowship has accurate information on their enemies and their weaknesses and contains many scholars who dedicate their lives to unearthing useful information about the Undead. However, they are hindered by cult politics with members of the Order of the Shroud considering them a waste of time at best and heretics at worst. [1a]

Their best warriors form a Knightly Order known as the Knights of the Raven. Agressive and ruthless they seek out the undead. Many were posted to Siegfriedhof in Stirland when rumours of Mannfred Von Carstein's return arose. [2b]

They are well equipped with conventional weapons and armour, but also carry mallets and hawthorn stakes to deal with Vampires as well as salt and blessed candles to banish unquiet spirits. [2a]