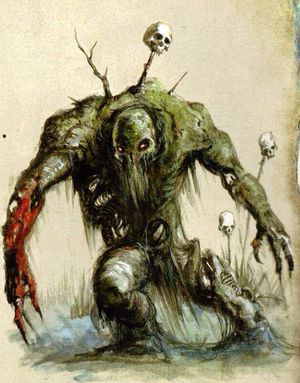 Fenbeasts are elemental creatures native to Albion that are summoned by Truthsayers and Dark Emissaries to do their bidding. [2a]

They are roughly humanoid-shaped hulks composed of the souls and bones of creatures that were drowned in the fens and swamps as well as of the mud, wet wood, and rotting plants of the swamp itself. A small Ogham Stone is embedded in the center of their body and holds the amorphous mass together. Fenbeasts are completely mindless, do not feel fear or pain, and are extremely strong. If their summoner is killed, they will collapse back into mud and rotting swamp detritus. [2a]

Since the Dark Emissaries fled the islands of Albion and were followed by the Truthsayers attempting to hunt them down, Fenbeasts can be found in armies throughout the known world - both kinds of these druids selling their services as mercenaries. [2a]

A Fenbeast is rumoured to be found near the village of Havelfurt in the Reikland. In the time of Magnus the Pious the marshes were the site of a great battle and along with the bones of dead soldiers, the Fenbeast’s fetid form is riddled with weapons and armour including one suspiciously well-preserved blade. [4]

The Jade Order maintain a score of Fenbeasts to fetch and carry for senior members but these have to be sustained by the chanting of several dozen apprentices. [3a]