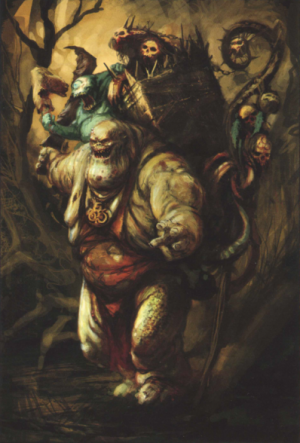 The Gardener of Nurgle.

Festus the Leechlord known also as the Dark Apothecary, and the Fecundite, was a once proud physician of the highest caliber, that has become one of Nurgle's greatest mortal servants. During the End Times he became known as Festus Empowered, the Gardener of Nurgle, becoming a Daemon Prince.[1]

Festus the Leechlord carries a alchemical laboratory, filled with pestilent potions, upon his back. He applies administers those elixirs to both friend and for, healing himself and those who are blessed by Nurgle, while those that don't dissolve immediately or explode in messy display of medical negligence. He also carries a toxin-laced Plague Staff into battle and is a wizard capable of casting Curse of the Leper.[1][3][4]

If an unfortunate traveller were to stray onto the twisted roads that lead from the northern forests into the Chaos Wastes, he might be paid a visit by a most unsavoury individual during the dark of the night. A shuffling, muttering figure stalks these lands, his moth-eaten robes gently clinking with vials containing unimaginable concoctions, which he is seeking to test out upon those he can catch or deceive. A devotee of the plague god Nurgle, this mysterious apothecary is quite, quite mad, though he once bore the respect of physicians, alchemists and scientists across the length and breadth of the Old World.[1]

Doctor Festus was once a skilled chirurgeon who founded hospices all across the province of Nordland, and was as compassionate as he was gifted. Specialising in curative unguents and salves, the good doctor cured hundreds of people every year. With Festus’ guidance, Nordland overcame outbreaks of the Screaming Ague, Blacklegge, and even the crippling Ghoulpox.[1]

It was the onset of Gnashing Fever that marked the beginning of the end for Festus. Try as he might, the doctor could not stem the spread of this new and highly contagious disease. Festus locked himself in his laboratory, working ceaselessly to create a healing elixir. Countless sleepless nights passed, and despite his best efforts, Festus still had no cure.[1]

Those plague victims he had managed to sequester in his laboratory were dying and he was powerless to prevent it. As the last of his test subjects shook themselves to death, Festus dropped to his knees, crying out for help. One by one, the slack-jawed corpses in Festus’ laboratory turned their heads to look at him. With one voice emanating from a score of parched throats, they promised to give Festus the knowledge necessary to cure not only this plague but all the diseases in the world, in exchange for a lifetime of service. In his desperation, Festus agreed.[1]

In the blink of a bloodshot eye, Festus’ mind was filled with every detail of every sickness, ailment and plague known to the great god Nurgle. This drove him entirely mad, washed away his compassion and left nothing more than an intimate knowledge of disease and a desire to experiment. Festus became the Leechlord of Nurgle, who goes to war in the name of furthering his revolting studies. Though his curative powers are greater than ever before, woe betide the fool who crosses the Doctor, for he is always in need of new test subjects, and not above force-feeding his latest concoctions to his victims in his quest to bring ever more repugnant forms of life into the world. It is a better fate by far to die on the field of battle than to be captured alive by Festus and used for his latest dark experiments.[1]

By the closing days of the Old World Festus had become a massive and bloated being, empowered with Nurgle's favour and on the very cusp of Daemon Princedom. Festus was part of Ku'gath Plaguefather's personal guard, leading Nurgle's mightiest daemon into the courtyard of Altdorf's Temple.

Their goal to desecrate this sacred place was stopped however, when Louen Leoncoeur, former King of Bretonnia engaged in a mighty duel with Ku'gath, slaying the Daemon and his Plaguebearers with his blessed blade and sacred blood. Festus was then able to finish off the weakened Louen with his diseased potions and encrusted sawblade, before being killed by the newly arrived Vlad von Carstein.[2]