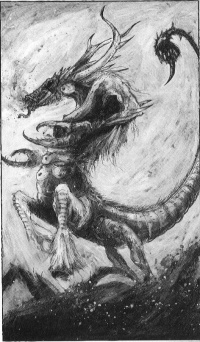 A Fiend of Slaanesh

Fiends of Slaanesh are bizarre daemons, hybrid creatures which combine reptilian, insectoid and anthropomorphic characteristics. [1a]

They are also known as the Beasts of Slaanesh, Bestials, Chimerial Leapers, Fiends of Exaltant Excess, Rams of Slaanesh, Unholy Ones. [1a][2a]

They possess a segmented body, a tail covered in fine scales and two pairs of humanoid legs that end in cloven hooves. Each Fiend also has a pair of claw-tipped and gangly arms that it commonly uses as front legs. A Fiend has not the necessary intelligence to apply these arms as grasping appendages, although it can employ them as weapons to deadly effect. Their bodies emit an entoxicating odor known as 'Sporific Musk' which is effective at overwhelming an enemies senses.[1a][2a]

They are usually coloured in pastel shades or white with rear bodies darker and their legs a different but complementary colour. They eyes are deep green whilst their horns are ivory in hue.[1a]

Incredably swift creatures which skutttle and skittle across any terrain they sing to each other as they run, a pervasive and high-pitched chitter than resonates through the Winds of Magic. Unprepared wizards can suffer headaches and memory loss on hearing this song. Often found on the flanks of the battleline, they use their musk to lure the unwary closer before tearing them apart. [2a]