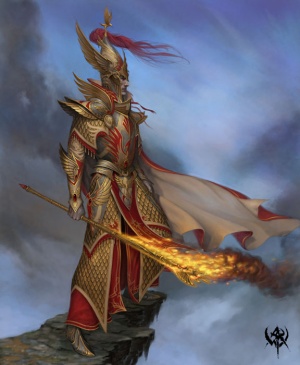 Finubar the Seafarer, is the current Phoenix King of Ulthuan. He was already famous for his voyages to the Old World before being elected by the princes of the High Elves. [1a]

Finubar has at least two sons - Prince Bel-Alhor was killed after the Battle of Bleak Crags and his elder brother Yrellian, who blames himself, now seeks his soul in the Galleon's Graveyard. [2a]

As Prince of Eataine, Finubar was sent to the Old World by then-Phoenix King Bel-Hathor. His mission was to evaluate the strength of the realms of men and to judge their worth as potential allies. He travelled extensively in the Old World and was thoroughly impressed by what he saw. Expecting to find people living in primitive huts he found instead powerful kingdoms with mighty cities protected by disciplined armies able to defeat the Orcs and to turn back the armies of Chaos. In short, an ambitious and greedy people with the potential to surpass the fading power of the High Elves. [1a]

Prince Finubar even managed to visit the Forest of Loren and encountered the Wood Elves, kinsmen to the High Elves. [1a]

On his return the prince advised Bel-Hathor to forge alliances with the mighty kingdoms of men and managed to persuade him to partially lift the ban which forbade any human to set a foot on Ulthuan. Henceforth, human merchants were allowed to trade their wares in the city of Lothern. Upon Bel-Hathor's death Finubar, his chosen successor, was elected. [1a]

Now as Phoenix King he continued the policy of trading with the various human nations, clippers being sent out as far as Cathay and Nippon. [1a]

In 2326 Ulthuan was attacked by a combined force of Dark Elves, followers of Chaos and Daemons and it was only by the actions of Teclis and Tyrion that the Everqueen was saved from them. [1b]

Later in 2425, Grom the Paunch invades Yvresse before being defeated at Tor Yvresse. [1b]