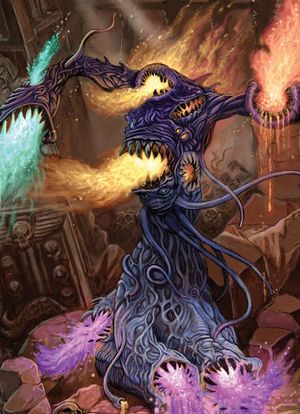 Thye have only the most basic minds but are finely attuned to the demands of a Lord of Change who considers them as expendable resources who may send swarms of bruning flamers against their foes to overwhelm them with blankets of fire. [4a]

Flamers travel using air drawn into and then expelled from the fleshly fungoid skirt. [2a][4a]

They are known as Burning Horrors, Flaming Whirlwinds, Flame Spouters. [4a]

The fire they emit is magical and as it burns, smaller shards will detach and fall taking on the appearance of nearby objects or beings. These imitations taunt and impersonate whatever is happening around them until even the flamer itself can become irritated by these parodies of reality. [4a]