From Warhammer - The Old World - Lexicanum
(Redirected from Flamers)
Jump to: navigation, search 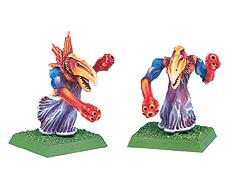 classic models of Flamers of Tzeentch.

current models of Flamers of Tzeentch.[1]

Flamers are daemons of Tzeentch, with numerous gaping maws that produce the searing flames which give them their name. They tend to accompany Horrors of Tzeentch in battle or form small units of skirmishers. Witnesses describe them as inverted mushrooms, with a trunk that splits into two arms.

Some of them ride on Discs of Tzeentch and are called Changebringers. Other Flamers drive the flying Chariots of Tzeentch that are pulled by Screamers of their god. In the Daemon army in the Storm of Chaos they even could become Uprising Demons.[1]