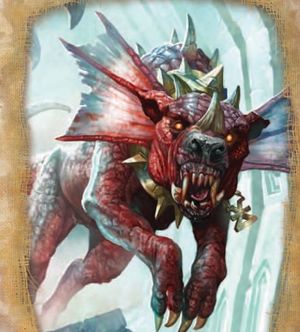 They are the terrible hunting beasts which Khorne unleashes upon those who have earned his wrathful displeasure, relentlessly pursuing their prey to the ends of the world. [9]

They are both Wolf-like and reptilian with heavy jaws and razor-sharp teeth that can shred armour. Their hide is scaly with iron plates in the shape of the skull throne of Khorne hammered into them. All wear a brass circlet that protects them from the magic of their enemies. [7a]

Their Dark Tongue name is Kha'a'a Khak'hyshk. They are also known as Beasts of Khorne, Blood Trackers, Flesh-Renders, Hounds of Wrath, Hunters of Blood, Inevitable Ones [2][7a]

In physique, they are described as eight feet long from nose to tail, possessing a lean, wiry frame with an arched back. They are covered in blood red scales whilst around their neck is a collar of spines connected by an orange-red membrane and rows of iron plates are driven into the flesh along their backs, held in place by brazen rivets in the shape of Khorne's rune.

Their eyes are milky white, their mouths are filled with huge fangs, and their two-toed feet end in razor sharp claws of iron. In addition, all of these daemons possess a collar of Khorne, a spiked collar composed of interlinked iron and bronze sections.[2]

They can easily keep pace with a racing horse over open ground. [8a]

Despite the initial usage as one word, the common usage after Slaves to Darkness is "Flesh Hound".