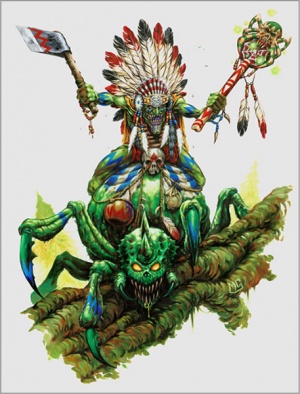 A Shaman of the Forest Goblins, riding a Giant Spider.

Forest Goblins are a breed of Goblins who live in the forests.

Divided into several tribes and hidden in deep forests, Forest Goblins are always eager to raid and pillage isolated farms, villages, and sometimes even cities. They decorate themselves with large colourful feathers, which are used in certain combinations to distinguish tribesmen from foreigners. They also use warpaints, bones, and teeth as decoration.[1] [3a]

As metal ores are lacking in the forests, Forest Goblins usually wield weapons made of wood, bone, and rock. Some weapons and armour made of iron or steel might be traded and bartered from other Goblin or even Orc tribes.

Spiders have a very important role in the culture and daily life of the tribes. Small and succulent Spiders are eaten, while others are kept as pets. Large horse-sized spiders are ridden as warmounts and small poisonous spiders are used by the tribal shamans.[2] A shaman will put these spiders inside his mouth so that the spiders bite him on the tongue. The poisons will drive the shaman a bit mad but also stimulate the part of his brain that controls magic.

While all other Greenskin tribes worship the twin gods Gork & Mork the Forest Goblins are known to also worship the Spider, and to adore the forests spiders as gods of the forest.

Professor Albrecht Zweistein, in his seminal work, Verdant Menace, claims that Forest Goblins worship a Spider God called, among many other colourful appellations, the Feaster from Beyond. [3a]