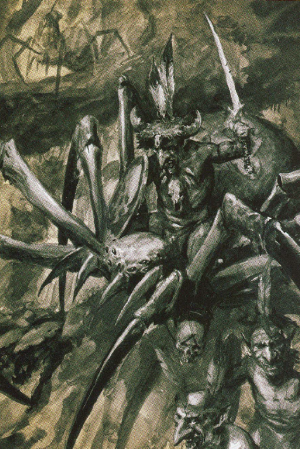 Forest Goblin Spider Riders are those Forest Goblins whom have managed to commune themselves with the large spiders of the forest and ride them into battle. It is commonly known that the Forest Goblin tribes have an odd affiliation with spiders that live deep within the darkest woods of the Old World, where they are often eaten for food, milked for poisons, kept as pets or even worshiped as Gods. There are many different varieties of Spider breeds within the Old World alone, however most of these giant spider have been known to grow large enough to serve as mounts for many Forest Goblin tribes, whom are also expected to capture a Giant Spider and hand-rear them into submission.

Whatever the breed, spiders are known notoriously for being highly poisonous and have steely, pincer-like mandibles that can punch through platemail, allowing the creature to deliver a lethal bite that can kill a man in moments. They have an unnatural ability to transverse even the most difficult terrain with relative ease, even through the most densely packed patches of woodland. In essence, Spider Riders are known to be skilled hunters and trappers of the forest, able to silently stalk their prey in near total silence, scuttling across branches and trees before being in the most ideal position to launch their attack.

When these Spider Riders are pushed into battle, these cunning hunters are often employed exclusively as skirmishers or light cavalry. They have been known to manoeuvre into dense terrain where they lure their enemy into an ambush. Some of these Spider Riders fulfill their roles as archer or skirmisher cavalry, where they are either equipped with crude bows or javelins to throw at their enemy from a relatively safe distance before retreating back into the woodworks.

Others have been known to be equipped with simple swords and wooden shields, and are usually the aggressive ones who are seen screaming maniacally straight towards the enemy as they try to attack with a combination of crude spear and venomous fangs. These riders have also been known to work to great effects during sieges, where the Spider Riders adept ability to scale steep slopes allows it to make surprise attack at enemy fortifications, plucking defenders from the ramparts and storming through even the smallest openings with relative ease. It is due to this dire reputation that many Imperial Towns that lie just a few days march from Goblin infested territory have rightfully grown to fear the eight-legged death-bringers.