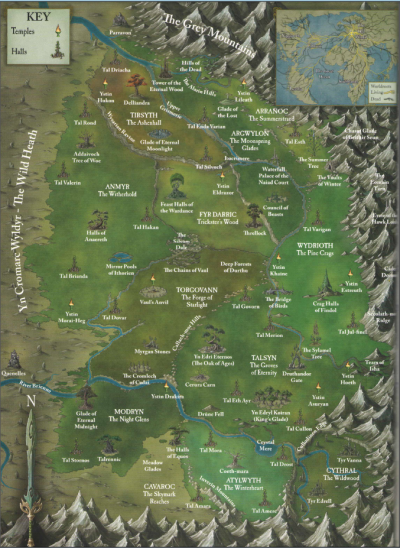 A map of Athel Loren.

The Forest of Loren or Athel Loren as it is commonly known is technically a part of the kingdom of Bretonnia, but in fact hides the kingdom of the Wood Elves. To the north and north-east the forest is bordered by the Grey Mountains and to the south and south-east by the Vaults. In the west, the forest ends at Yn Cromarc Wyldyr (The Wild Heath). The south-east corner of the forest is a dark and dangerous place known as Cythral (The Wildwood).

Athel Loren is the oldest Forest in the Old World.[1b] It is a magical, but dark and haunted place where malicious spirits roam through the twisted undergrowth and tiny darting shapes flit between the trees on the edge of vision. The Forest itself is like a single consciousness and is aware of all that occurs within its boundaries. It is perfectly willing to crush any that enter its borders, whether they have evil intentions or not.[1a]

The Forest itself is self-aware. At the dawn of time the trees began to think in ways trees are not meant to. The forest learned of feelings such as anger and hate, it became aware of the mortal races crawling upon the world and was not pleased with their intentions. Whether it was the Old Ones themselves that granted life to these woods or if it was the Coming of Chaos which awoke the trees, none can say. Regardless, the forest has been inhabited by all manner of mysterious and often dangerous forest spirits since the earliest times. More recent comers are the Asrai Wood Elves, the descendent of Elven colonists who made a pact with the forest following the withdrawal of the Asur (High Elves) after the War of the Beard.

Athel Loren defies the natural laws of the world and time does not flow normally within its boundaries. Individuals may find themselves lost within the forest for decades and return to find that only mere minutes have passed in the outside world. equally one might wander through the wood for a couple of hours and find that the outside world is unrecognisable as centuries could have passed since he emerged in the forest. The Wood Elves themselves are therefore forced to not measure time as other mortals do, to them there are only three times; the time before Ariel and Orion (the past), the rule of Ariel (the present), and the death of the forest (the future).[1b]

Many of Elf colonists first entered the vast forest were intrigued by the strange lights and huge shapes they glimpsed but were not able to penetrate into its depths. Three expeditions of a thousand warriors were dispatched to seek its secrets but each met with disaster. Whilst 700 elves survived the first one, none returned from the second and only a single battered elf emerged from the last, but she died insane the next day. [1c]

Naming the forest Athel Loren, the Elves now recognised it as acting like a vast creature and reacting to whatever it considered as a threat. Waystones marked the apparent boundary and they retreated to the outskirts but still on occasion elves would be lured into its depths by nymphs, never to return. However, in the main, as long as the Elves did not attempt to reach the interior, the forest seemed to tolerate them. [1c]

When the War of the Beard began in -1997 IC[1d] to rage across the Old World and many of the settlements on the border of the forest were burned and the people within killed. When Caradryel, the new Phoenix King finally ordered a withdraw from the conflict, he also ordered all elves to return to Ulthuan [1c] in -1589 IC. [1d]

Those who had survived the war refused and declared themselves independent and took the name Asrai to distinguish themselves from their cousins across the ocean. However, the Dwarfs saw no reason to allow their enemy to linger and marched into the forest, hacking down and burning the trees that sheltered their enemy. The forest, weakened in the winter was unable to crush the invaders and instead opened paths to the elf settlements. The Elves however proved elusive and evasive and after losing many running battles against them, the Dwarfs retreated. [1c]

Those Elves that remained now began to split into kinbands or kindreds and soon disputes began to arise between them as they moved deeper into the forest. Athel Loren seemed to almost welcome them now until at last a kithband found the Oak of Ages and Ariel, a Sorceress managed to communicate with the forest itself. The elves vowed to repay the forest for what they took in service and sacrifice but they were still forbidden from the south east corner of the woods and all who entered, did not return. [1c]

In the Autumn of -1125 IC, the Dwarfs once more marched on the forest and fought deep into the slumbering woodland and for the first time the various lords and ladies of the elves gathered at the Oak of Ages. Here Ariel was drawn to the hunter Orion and as the Tree Lord Adanhu addressed the gathering, offering to fight alongside them but that the forest required a sacrifice, they vanished into the trees. The forest spirits and the elves fought together, even the enraged Durthu joining the battle until they dove the Dwarfs to retreat. The Dwarfs would not return for many centuries, recording the battle as Karaz-Zan and entering new grudges. [1c]

However as the winter took hold of the woods, hordes of hungry, bloodthirsty Orcs & Goblins arrived and it seemed nothing could stop them. Suddenly the woods awoke as Kurnous arrived and again the forest spirits and elves united to destroy the invaders. Returning to the Oak of Ages, the exhausted elves found Ariel and Orion enthroned and they paid homage to the Queen and King of the Wood. [1c]

Decades later, Cyanathair the corruptor began to move through the forest, calling the Beastmen to attack the woodland, burning and hacking the trees. Humans, the Bretonni also entered the lands abandoned by the elves long ago and began to build their own settlements, driving out the greenskins around -1000 IC. [1d] Those who tried to enter the great forest however did not return and it quickly became shunned as few, haunted world. [1c]

Once more Cyanthair returned in - 815 IC [1d] and this time he had thousands of beastmen and monsters to aid him. The battle was fierce and this time not all of the forest fought on the side of the elves - many dryads embraced their most capricious and malevolent nature. Finally at the Battle of Anguish in -813 IC [1d] Cyanthair was slain by the Tree Lord Coeddil and Ariel. Still, even as he died, Ariel felt him being reborn in another forest. [1c]

In -625 IC, [1d] Coeddil waited until Ariel had entered her slumber before slaughtering all in the King's Glade, to try and prevent the summoning of Orion. Yet Ariel awakened and confronted the raging Tree Lord, banishing him and his handmaidens to the south eastern corner of the forest. [1c]

In 976 IC [1d] the tribes of the Bretonni were under heavy attack by the greenskins and Naieth declared that Athel Loren needed the humans to survive to ensure its own safety. Eventually the Wood Elves would ride to the aid of Gilles the Breton. [1c]

Drycha, a Branchwraith enters the Wildwood to meet with Coeddil in 1050 IC. Cyanathair invades again in 1137 and is slain by Durthu. [1d]

In 1350 IC Grungni Goldfinder led an expedition into the forest but was defeated by elves under Lord Findul at the Battle of Pine Crags. [1c]

After entering the forest in 1670 IC, an army from the Empire is ambushed and forced to flee. Lady Elynett prevents Drycha from disrupting the waystones that keep Coethil in the Wildwood in 1697 IC. [1d]

In 2007 IC Cyanathair is slain again, this time by Scarloc and his archers who pierce him with a hundred arrows. [1d]

Orcs fleeing the Errantry Wars force their way to the heart of Druthu's domain where they are annhiliated. [1d]

The Lichemaster Heinrich Kemmler entered the forest in the winter of 2495 IC and began to loot ancient cairns and tombs of their dead before he was defeated at the Battle of the Cairns. [1c]

Athel Loren is divided into twelve realms, each ruled by a lord and/or lady. Many of these realms posses unique qualities, such as being forever locked in a particular season or time of day.