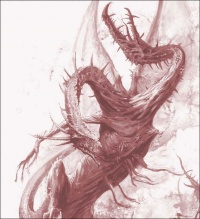 Galrauch, first of the Chaos Dragons

Galrauch was the first of the Chaos Dragons, possessed by a Lord of Change. [3a]

This dangerous creature has the ferocity of a dragon combined with the sorcerous capabilities of the Daemon. He has two, many-horned heads with jaws filled with rows of sharp teeth. Across its body is stretched, fibrous skin, with tentacles and spikes. He has two large chunky wings.[1]

Ridden by the Elf Prince Learfin at Aenarion's side during his battle against Chaos, he was also referred to as the Gold Drake, for his scales were beautiful. [3a]

During the battle, Galrauch devoured a Greater Daemon of Tzeentch, named Fateclaw, after it killed his rider. When Galrauch killed Fateclaw he had little time to celebrate as the daemon's magic started to work on the mighty Dragon, who then turned against the elves. As he did his head and neck split down the middle, creating two heads. At first the daemon-dragon was routing the Elf army but then one of the heads started attacking the other. [3a]

This is believed to be the spirit of the noble dragon Galrauch still fighting the Daemon that possessed his body. During this moment the Elves attacked the Dragon. Although the Daemon eventually gained control over the body, it was forced to flee and slept for centuries. [3a]

Since then he is said to be the father of all Chaos Dragons, born from his blood and sorcery. Once in a while, he returns to spread mayhem.[3a]

He killed King Thurgrim Rockarm and his kin and destroyed the city of Languerre de Lac. [3a]