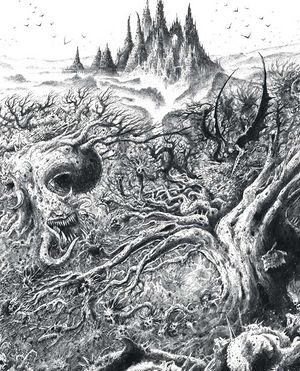 The Garden of Blight is a vast expanse of carefully tended but often overgrown vegetation in the Realm of Chaos. [1a]

The garden itself has a strange intelligence and is driven to devour and infect any intruders into its domain. As the power of Nurgle grows, so does the garden and can spill into the Crystal Labyrinth which inevitably provokes a violent response. [1a]

Plants from a hundred realities and a thousand worlds can be found here, and like any dedicated gardener, Nurgle loves to combine the flora to create new varieties and strains. Consequently, there are huge numbers of daemonic/plant/fungi hybrids - often malign and hungry. [1a]