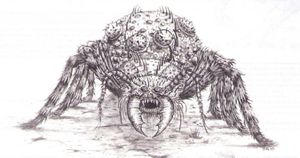 Giant Spiders are huge carnivorous creatures that can be found in the Old World, Lustria, Naggaroth and the Southlands. [1a]

Growing to the size of a small horse and often hunting in packs,[2a] they have a powerful and poisonous bite and are protected by their chitinous armour. [1a] Colouring, patterns, and other traits vary greatly by region with northern species having black and brown fur and grey fur in the southlands, though all bear strange markings in iridescent shades of blue, green, and red. [3a]

Forest Goblin tribes have learnt to capture broodlings and hand rear them as mounts. [2a]

Known varieties of Giant Spider include: