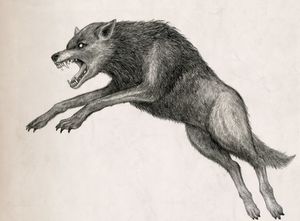 Great or Giant Wolves are larger and fiercer by far than any natural born wolf. [1a]

An extremely cunning species of savagely fierce, cruel, and violent pack animals that are known famously for their unnaturally large size as well being found roaming within large tracts of wilderness within the Warhammer World. In times long past, these predatory pack animals were so vast and dangerous that when the first Humans came upon the lands of the Old World, the Wolves prowled the wilderness almost unchecked, slaughtering whole villages and delaying Mankind's progression for nearly a millennium. Even to this day, Giant Wolf packs are still a belligerent threat to outlying villages that stray to close to the untamed wilderness beyond the reach of Human civilization.

Their eyes are a lambent yellow or green, a flame flickering above teeth as long as hunting daggers and within each dwells a hunger without respite. [1a]

As their name suggest, these Wolves have been known to grow to an unnaturally large size, with some growing larger than even a pony but rarely grow as large as a horse. When hunting, these Giant Wolves have adapted to become skilled, cunning and patient hunters that would naturally hunt in large packs, encircle their intended prey and when the timing is right, pounce from all directions. Using their overwhelming numbers, these Wolves would target the weakest point within the animals defenses or prey upon the most helpless one within the group.

Small packs roam the Forest of Shadows. [1a]

The Eonir believe they are cunning creatures with their own language that rather than being tamed make common cause with the Goblins who ride them, but still may be devoured by the Great Wolf in times of hunger. [1a]

As a result of their mutual instinct to pick upon the helpless and weak by tactics such as overwhelming and encirclement, there has always been a strong bond and a deep respect between the Goblins and Giant Wolf. The alliance between the two creatures is nevertheless a very strenuous one, for their loyalties to each other are mainly kept simply for personal gains. In this mutual exchange, the Goblin is rewarded with a fast and agile mount while the Wolf is usually rewarded with a regular supply of food. If either of them think the mutual exchange is not worth it, they will have no problem fleeing the field of battle leaving the other to be left to their fate. Goblins ride on Giant Wolves in the same way that other races ride upon horses, which eventually lead to the creation of Goblin Wolf Rider mobs that have been known to plague the open plains of the Badlands and the Eastern Steppes.