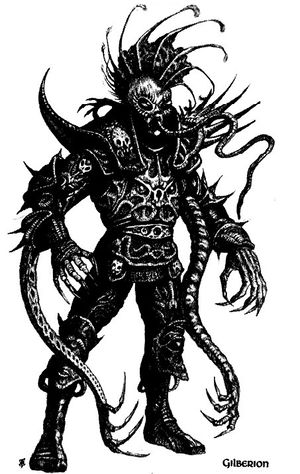 Gilberion, the Denied Lord is a Champion of Slaanesh. [1a]

A Elf lord who was deposed and wiped from the records of his people when his depravity became known as he refused to accept any constraints due to morality or mortality. [1a]

Those few who dare to follow him now are quickly used up and detoryed as they are used in a depraved and brutal fashion. As a victim-lover dies, Gilberion voices his devotion to his god. [1a]

He has been gifted with the Characteristic Gain, Crest, Ensnaring Tongue, Extra Joints: Arms, Face of a Daemonette, Magic, Multiple Arms, Razor Sharp Claws, Tentacles. [1a]