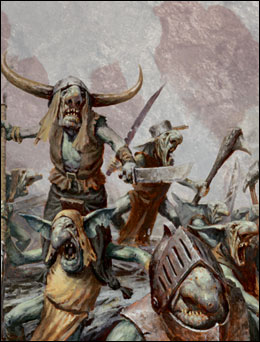 A Gnoblar is a small, weak and altogether stupid form of Goblin. [1a]

They are usually kept as servants/pets/slaves to the Ogres of the Mountains of Mourn. An archetypal Gnoblar is usually very small (a foot shorter than a common Goblin), with thin limbs, and a disproportionately large nose and ears on his head.[1a]

A Gnoblar's position within Ogre society is, much like that of their Ogre masters, based almost solely on ear and nose size. A Gnoblar with large, floppy ears and a huge, dripping nose is seen as worthy of respect, whereas one with a very small nose and ears is looked down upon by everyone with bigger appendages than himself. Likewise, a Gnoblar belonging to a Tyrant (a "Lord") will usually act much like his master would, pushing around everyone smaller than himself.[1a]

Gnoblars are usually very poor fighters, and will seldom attack anything bigger than a weasel without backup, but if supported by a dozen or so of his brothers, most Gnoblars are willing to take the risk of attacking a fully grown mountain goat.

In a full-scale battle, particularly courageous/foolhardy Gnoblars will band together in large swarms of so-called Gnoblar Fighters and attempt to earn their masters' favour by killing a particularly dangerous foe (i.e bog down some weak-looking enemy unit and hope that they will suffer cardiac arrest before the Gnoblars start getting killed).

Gnoblars who have been Earmarked (a process involving the Gnoblars Ogre Master taking a bite out of the Gnoblar's ear as a sign of ownership) will start to act like their owners. For instance, a Gnoblar belonging to an Irongut (commonly known as a "Woodbelly") will start walking around camp bullying anyone smaller than himself, whereas a "Manbiter" (a Gnoblar who belongs to a Maneater) will spend the majority of its spare time relaying inconsistent war stories to the younger and less well-travelled Gnoblars.

The most powerful Gnoblar in recent memory was the Great-King-Lord Bezer. Being possessed of a huge dripping nose, flapping ears and an intellect far beyond that of his peers, Bezer quickly became Overtyrant Greasus Goldtooth's favourite Gnoblar. After arranging the death of his rivals for Goldtooth's favour (instigating a fight in the Overtyrants larder, delaying his third breakfast), Bezer used his cunning mind (for a Gnoblar) to forge an empire of two and a half Gnoblar tribes. Bezer's empire crumbled overnight, however, when the Great-King-Lord was crushed by his owner, who fell on him while drunk.

Depending on whether or not a Gnoblar has a master (and said master's position within Ogre "society"), a Gnoblar will be referred to by a certain title, as well as fulfil a certain function within the Gnoblar community. Titles, masters and functions are as follows: