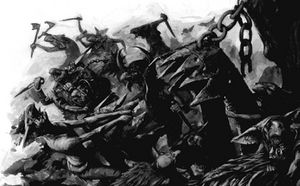 Gnoblar Trappers are the Gnoblars that try to imitate and follow the Ogre Hunter.

Unlike Gnoblar Fighters, they don't fight in big regiments, knowing that they are too weak and unskilled to stand against proper troops. Instead, they travel in loose groups, skillfully moving through the terrain and often managing to sneak unnoticed behind the enemy lines. If they are not needed somewhere else, they will usually travel near the Hunter, the hail of razor-sharp objects spelling fatal injuries to some enemies and sometimes forcing them to give a second thought about attacking.[1][2]

In spite of those useful skills, they are still Gnoblars and so they are prone to fleeing once things become dangerous. Luckily, neither Ogres nor their own kin will care an iota should a group of them run away. They also tend start insultfests with the group members, the resulting bickering delaying them greatly.[1]

The leaders of the trappers are somewhat ironically named Snarefingers.