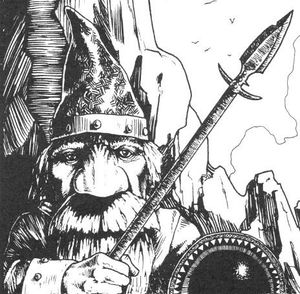 The Gnomes are an ancient race relative to Dwarves. They are shorter than Dwarves but have the same cultural background and share many traits. They speak a dialect of Dwarfish language. The Gnomes see Dwarfs as stupid and oafish and the Dwarfs think that the Gnomes are mischievous and troublesome. Though the gnomes are not evil they are very short tempered and difficult to deal with. It has been known for Gnomes to imprison other races - especially humans who angered them. Also the Gnomes are particularly sensitive about their squeaky voices.[1]

Like Dwarfs, Gnomes live in underground caverns and hate Greenskins.[1]

In battles Gnomes fight in infantry and cavalry formations, using ponies instead of horses. They also employ Gnomish wizards that can presumably cast illusion spells.[1]