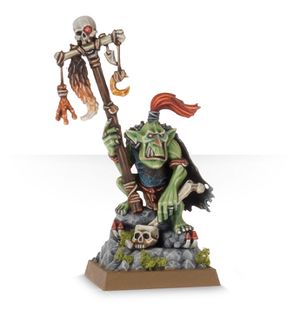 Goblin Shamans are Goblins whose minds are able to harness the power of the Waaagh! for magical use. [1][2]

Unlike the Orc Shamans, who employ this power to blast the enemy with green bolts, the "magic of da Little Waaagh!", as it is known amongst the Greenskins, is much sneakier, to the extent that its users subconsciously steal the Winds of Magic from regular wizards' grasps as soon as they sense their inability to defend against it.[1][2]

The best-known spell of the Little Waaagh! guides the blades of backstabbing Greenskins through the chinks in enemy armour and into the vulnerable areas, almost guaranteeing death. Other common spells include wracking the hostile regiment with powerful itching, shrouding their allies in blackest mist, turning charging enemies blind, making spiders' poison mysteriously appear on the weapons of striking allies and even using the power of Gork to turn the surest blows and best-aimed shots into epic failures.[2]

While helping their brethren is great, Goblin Shamans don't mind killing some opponents themselves and are thus able to literally kill swathes of the enemy with a stare and unleash the deadly Curse of da Bad Moon, power ripping the hordes of the enemy apart in a vortex of destruction.[2]