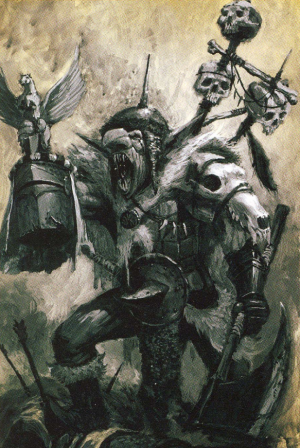 A deadly Goblin Warboss lifts the head of a slain enemy.

Goblin Warbosses are the biggest, cleverest, and most cunning Goblin warrior within a tribe, whom are known to be exceedingly crafty individuals as well as fairly adept strategist in both conventional and unconventional tactics of warfare. [1]

Instead of fighting their way into the top, most Goblins use a more subtle method to gain power, usually employing tactics such as assassination, backstabbing or poison to get the job done. As with any Orc Warboss, these Goblins are often equipped with some of the finest weapons and armor within a tribe.[1]

Within Goblin dominated tribes, Goblins often follow a less straightforward path to the top ranks, as they are both more devious and more cowardly than their brutish Orc cousins. Underhanded ploys and strategy are the preferred tactics for goblionoids. Although straight-forward fighting is still an option, it is one that is typically left to the especially desperate. All Goblins use dirty tricks, with the best schemers being the most dangerous of their diminutive kind and the most likely to rise through the ranks. Those Goblins that make it to the very top are offered the title of Warboss.[1]

While Goblin Warbosses are not as physically imposing as their Orcish cousins, this dosen't mean that they aren't deadly in their own right. This is typical Goblin cunning; rivals are more likely to encounter mysterious accidents or manipulative assignments that end in death than one-on-one combat for supremacy. Such tactics vary from tribe to tribe, from the hit-and-run assasinations of the Wolf Rider tribes to the precisely-timed avalanches of the Night Goblins. Goblin Warbosses in tribes that consist of both Orcs and Goblins are often subservient to their larger kin, but some have developed a knack for placating their over-sized comrades. The cleverest Goblin Warbosses can manipulate the Orcs into doing their bidding, thusly making the Goblin the "power behind the throne", able to aim the violence of the Orcs in any direction he chooses.[1]