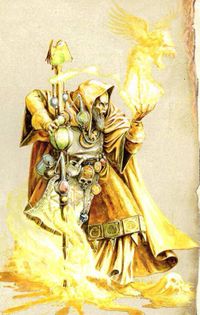 A wizard of the Gold Order

The Gold Order, also known as The Golden Order is one of the eight Colleges of Magic which trains Wizards in The Empire. [1]

Gold wizards are masters of metals, ores and alchemy or as they term it Alchemical Thaumaturgy. [1b] They are the most skilled in this area of all men in the Old World. As a result Gold wizards are prone to smelting these substances into unruly liquids to aid their magical powers. The Order's headquarters in Altdorf is, more or less, a giant forge that is filled with chimneys and furnaces. It is situated close to the River Reik in order to cool the forges. The Lore of Magic they study is the Lore of Metal.[1]

Many magisters of the Order are seen in work clothes, leather arpons, skullcaps, gloves and goggles but conversely they can display the infamous wealth of their Order in their clothing. When not working they may dress in fine robes, embroidered with gold brocade and threads and predominately coloured yellow or gold. Older and/or more powerful members of the Order are noted as wearing golden masks and guantlets, leading to much speculation as to what lies beneath. [1b] As they grow in knowledge and power, the magisters of the Order often find themselves transformed in minor or major ways such as a golden sheen to the skin, stiffness of the limbs, mercury tears and sweat or a harsh voice. [1d]

For the study of the yellow wind of magic, Chamon, Teclis and Finreir choose the most analytical and studious of the hedge-mages that had come them to learn true magic. As the humans progressed in their studies, the elves did notice that they began to develop characteristics and drives attuned to their particular wind of magic but this, they considered was the only safe way to develop their powers and remain free from the corruption of Chaos. [1c]

Soon the Gold Magisters as they called themselves were becoming obsessed with experimentation and rational thought so the elves gave them guidelines how to integrate alchemy and sorcery. The mages were able to create a variety of poisons and potions related to their own wind of magic using it as reagent. The skills and knowledge of the Order was further enhanced with an influx of wizards from Araby who brought carefully preserved skills from ancient Nehekhara. [1c]

The Order now owns most of the alchemy guilds and shops that can be found across the Empire, which also act as a recruiting ground for new apprentices. The Imperial armies also calls upon them to make black powder, liquid fire and other compounds of war and they are considered the most competent human manufacturer of magical items in the Old World. [1c]

During the Storm of Chaos they used their skills to arm the empire's heroes and armies with powerful magical weapons and armour. [1c]

The Order has attempted to persuade the Dwarf's to share their secrets of runecraft but predictably with little or no success. [1c]

Most of the Order live in or near a city, requring excellent trade links to supply many and varied esoteric ingrediants that they require for their studies. Although they interact with many members of the public, espeically the lower ranks of the Order, they can still provoke suspician when their laboratories emite strange smells, lights or regretably on occassion explode! [1c]

The Eagle's Wing, The Soaring Eagle [3a], The Mortar and Pestle, Smithing Tongs, The Smoking Brazier and Forge Bellows. [1c]