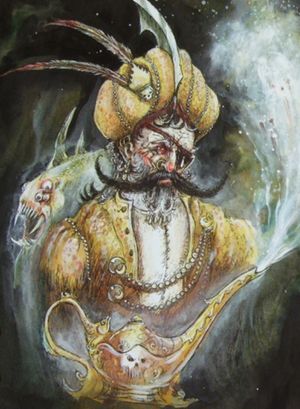 Golden Magus, the Sultan of the Seas is a powerful and enigmatic Arabyan Wizard. [1a]

He has claimed to be the king of Copher reborn and an exiled patriarch of the Colleges of Magic and is often to be found in the gambling dens of Sartosa. [1a]

His one eye is usually ringed with kohl, his body clad in robes of the finest silk and even his skin is dusted with powdered gold. Depsite his apparent age, his movements can be extremely fast. [1a]

He is skilled in summoning and commanding the spirits of air, fire and the ocean. Within the Flaming Scimitar are large numbers of magical jars which imprison a elemental who will obey a single command when their prison is shattered. [1a]

He carries a blade that is enchanted with a hundred fiery curses and his famous pleasure barge, the Flaming Scimitar has vast supplies of stolen treasure as well as magical artefacts such as a pair of clockwork Thundertusks. [1a]