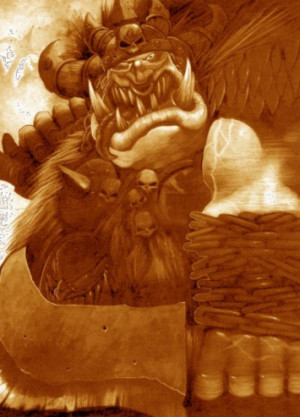 Golgfag's Maneaters also known as Golgfag's Ogres, are a famous band of Dogs of War mercenaries hailing from the arid mountains of the Ogre Kingdoms. This band of mercenaries consist entirely of Ogre Maneaters, lead by their leader and perhaps the most infamous Maneater alive, Golgfag Maneater.

For as long as he had lived, Golfag Maneater has lead his brethren into countless battles for riches, glory, and most importantly, food. He has served in the armies of many warlords and generals of many nations, never discriminating on who he is fighting for or against.

Such is his reputation in the battlefield that the Ogres under his command are never short on employment. This Ogre company has seen many exotic lands and horrific battlefields, forging these already formidable warriors into battle-hardened veterans, even among their fearsome kin.

Their exploits have included joining Golgfag in his looting-spree upon the sacred island-continent of Ulthuan, setting their eyes upon the ruinous capital of Skavenblight and surviving to tell the tale, stealing and guzzling more kegs of Bugman's XXXXXX than most Dwarfs have ever seen, and they have been with Golgfag when he was personally decorated by Emperor Karl Franz himself. It is said that so long as Golgfag Maneater leads this company, the Ogres under his command will almost never go hungry.

Possibly one of the most successful Ogre mercenaries of all time, Golgfag Maneater forged a reputation for the Ogres as fearsome killers for hire long before they became a relatively common sight in the mercenary armies of the Old World. When he started out, Golgfag found himself leading a bunch of almost equally brutal Ogre warriors as mercenaries, where he quickly developed a taste for man-flesh and joined forces with an Orc Warlord called Gnashrak Badtooth, where he was fighting against the Dwarfs of Karak Kadrin high up in the Worlds Edge Mountains. Although Golfag had never tasted dwarf-flesh before, when he marched alongside the Orc he was certain he wanted to try. [1a]

Gnashrak thought the Ogres would prove just the kind of troops he needed to sort out the Dwarfs. However, he soon grew tired of the Ogres’ appetite for Goblins, booze, and raucous singing. After one particularly loud drinking session, Golgfag and Gnashrak got into a huge fight. Soon all the Ogres and Orcs were scrapping. Golgfag tore off the Orc’s arm and used it to bash his way out of the encampment before leading his lads to safety. Gnashrak was completely enraged and demanded the head of the Ogre. Golgfag promptly offered his service to the Dwarf King Ungrim Ironfist as a way of avoiding Gnashrak's retribution, where upon arrival he showed Gnashrak’s arm to Ungrim as proof of his sincerity. In the face of such a convincing offer, Ironfist was hardly able to refuse. Golgfag led his Ogres and a party of Dwarfs along a secret path towards the Orc’s encampment in Broken Leg Gully -- so called because of its impossibly steep and treacherous cliffs. With the aid of the Ogres, the Dwarf raiding party made sure that the Orcs were trapped and horribly slaughtered. Gnashrak was captured and subsequently bound in chains and delivered to Ungrim Ironfist.[1a]

Pausing only to secretly loot the Dwarf King's treasury during the ensuing celebrations, Golgfag headed west into the lands of the Empire. There he took employment in the ranks of the Imperial army, and it was here that he discovered Halflings were by far his favorite food. Shortly afterwards, he turned up in the lands of Tilea in the employ of one Lorenzo Lupo. Prince Lorenzo found the Ogres to be excellent troops on the battlefield, but soon found that these Ogres became a considerable nuisance on his city. The citizens of Luccini were forever complaining of being beaten, robbed, or bullied by the rowdy Ogres. One night, Golgfag decided to take rather more than his fair share of wine, directly from Lorenzo’s warehouses. When the Ogres fell into a drunken stupor Lorenzo sent a company of pikemen to arrest them and threw them into his dungeons.[1a]

Fortunately for Lorenzo, an opportunity to be rid of the Ogres altogether arrived in the form of a messenger from one of the Border Princes, Arnulf Schwartz who was hiring other mercenaries on behalf of his master. Lorenzo cheerfully fitted him up with the Ogres, took his fee, and released Golgfag and his crew from captivity. Golgfag was understandably annoyed, but faced with a new offer of employment, a complimentary baggage train of food and a firing squad of Tilean crossbowmen, the Ogre decided to let matters lie for the moment.[1a]

Golgfag’s stay in the Border Princes proved a successful and profitable one. The Ogres grew fat and wealthy. To ensure they wouldn't cause trouble, the Ogre Mercenaries were kept fighting battle after battle, where they were allowed every chance to indulge their appetite for fresh meat. Golgfag’s only regret was the scarcity of Halflings to find and eat. When he heard that trouble was brewing between the Orcs and Dwarfs, Golfag and his Ogres headed northwards once more. He fell in with a bunch of Orcs and Goblins and was soon feasting upon Dwarf once again. [1a]

It was after a foray against the Dwarfs that Golgfag was ambushed by none other than Ungrim Ironfist, his former employer. The canny Dwarf King led the Orc army into a trap using a supply convoy as bait. The convoy consisted entirely of wagons full of cheap ale which the Greenskins duly captured and drained. Golgfag and the Ogres courageously drank themselves into oblivion along with the rest. When they awoke, the Ogres found themselves in a dungeon deep below Karak Kadrin, along with what remains of the Orc army. The Dwarfs no doubt expected Golgfag to die in this cramped and crowded dungeon, and probably thought this would be easier and safer than trying to kill the Ogre in some other fashion. [1a]

When the Dwarfs finally opened the dungeon some months later, they were startled to find Golgfag still alive. He had eaten every other inmate within the dungeon, including even his own brethren except one Ogre by the name of Skaff. Out of respect for his oldest drinking buddy, Golgfag had only eaten one of Skaff’s legs. A great pile of Orc, Goblin, and Ogre bones lay in one corner. When he heard of this, Ungrim Ironfist was so impressed that he ordered Golgfag to be taken a long way away and released. [1a]

Golgfag soon gathered together some of his old lads and other keen young Ogres into his new mercenary company. Skaff decided to stick with Golgfag despite everything, and gratefully accepted the position of standard bearer as this gave him something to lean on. Before the summer was out, Golgfag headed south over the Grey Mountains in company of an Orc raiding party. It was there that he fought his first battles against Bretonnians and where he would feast upon human flesh once more. [1a]

From that day to this, Golgfag has never looked back, with both his reputation and his girth continuously growing over the years. Although he could be mistaken for a mere Bruiser, Golgfag has been in active service for over sixty years, and has considerable tactical acumen to go with his lattice-like network of scar tissue. From now until the day he dies, Golfag has wandered the world alongside his small army of battle-hardened Ogre mercenaries.

Golgfag Maneater - Captain of the regiment. More tales are told about Golgfag than any other Ogre alive, and Golgfag himself spins a great many of them. Though he exaggerates with wild abandon, Golgfag is still the most successful of all Ogre mercenary captains. He has won countless battles, looted upon the sacred island of Ulthuan, set eyes upon ruinous Skavenblight and survived, guzzled more kegs of Bugman's XXXXXX than most Dwarfs have even seen, and been personally decorated by Emperor Karl Franz. His wanderlust prevents him from becoming a great leader, but earns him plenty of loot and renown. His title of 'Maneater' was coined when he ate his human paymaster whole and set off with his pay-chests - although the moniker is misleading, for he is not picky at all about whom or what he eats. Golgfag carries a massive cleaver in one fist ("fer splitting 'eds") and an even larger, spiked club in the other ("fer crumpin' 'eds"). He wears a heavily armoured coat made of scavenged bits from battlefields across the Old World. [1a]

Skaff - Banner bearer of the regiment. Skaff decided to stick with Golgfag despite his eating of his left leg during their imprisonment in Karak Kadrin, and gratefully accepted the position of standard bearer as this gave him something to lean on. He carries only one weapon, but bashes his foes on the head with his banner so counts as having two. [1a]

The Maneaters can be hired by any army except Bretonnia. [2a]