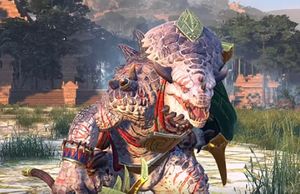 Gor-Rok, also known as the Great White Lizard and The Scarred One is an albino Saurus Scar-Veteran. [1b]

He is a very skillful, intelligent Saurus who is blessed by Tepok with the gifts of fighting masterfully and is almost impossible to kill (he has survived, among other things, being hit by a chariot and impaled through the chest with a lance by a Dark Elf warlord).

Much larger than most Saurus, he knowns neither pain or fear and is an unrelenting force in combat having survived horrendous wounds. When not at war he dwells at the top of the tallest pyramid of Itza where Skinks tend to his every need. [1b]

After Dark Elves steal the Star Stela of Quetli, Mage Priest Tepec-Inzi wakes from a trance, raises an army and transports it to the Ashen Coast in time to intercept the raiders emerging from the Black Way. His war leader is Gor-Rok who famously smashes the enemy commanders chariot with his stone shield and when stabbed through the throat, uses the iron lance to pull his enemy close enought to tear out his throat. Only when the Star Stela is retreieved does he take time to have the lance removed.[1a]

He slew the Savage Orc Warboss and his Wyvern at the Battle of Bloodpools. [1b]

His shield, the magical Shield of Aeons, acts like an obstacle for those who are foolishly brave enough to charge him with full force whilst he also carries the Mace of Ulamak. [1b]