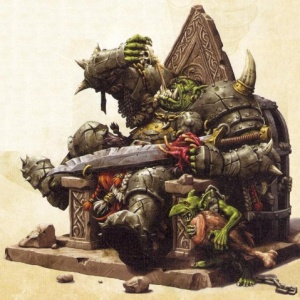 Gorfang Rotgut is the infamous Warboss of the Red Fang Tribe and the current ruler of Black Crag, the former ancient Dwarf hold known originally as Karak Drazh.

Gorfang is an immensely strong Orc. He lost an eye at the Battle of the Jaws, and wears an iron patch to cover the wound. Many of his battles have been fought against Dwarfs, including the siege of Barak Varr and the attack on Karak Azul. As a result of his long struggles, Gorfang has acquired an unreasoning hatred of the Dwarf race. [1]

Over the centuries, many tribes have fought over and occupied Black Crag, and the most powerful tribe has always taken the crag as its newfound home. Gorfang's tribe, the Red Fangs, is currently the most powerful Orc tribe within the area around the western end of Death Pass. Gorfang has subjugated most of the local Orc tribes and has since allied himself with the Night Goblins of Karak Eight Peaks, whose leader is the old and infamously cunning Skarsnik. The two leaders enjoy an uneasy alliance, with Skarsnik controlling the mountains around Karak Eight Peaks and the eastern end of Death Pass, while Gorfang controls the western end and the adjoining area. He also brokered an alliance with the Black Orc Warboss, Morglum Necksnapper, who assisted him with his attack on Karak Azul. [1]

When Gorfang attacked Karak Azul he broke into Lord Kazador's throne room and captured many of the Dwarf Lord's kinsfolk. Some, including the Queen herself were taken back to the dungeons of Black Crag where they remain to this day, to the anger of Kazador. The Dwarf Lord's son, Kazrik, was not taken captive but was shaved, and his head branded with a crude Orc glyph representing Gorfang. Then he was firmly nailed to Kazador's own throne. Although Kazrik survived, the experience has unhinged him somewhat. Lord Kazador has sworn vengeance and awaits the day when he can crush the Orc chieftain himself. [1][2a]

A few years before the End Times, Gorfang was finally slain and his severed head presented to King Kazador.