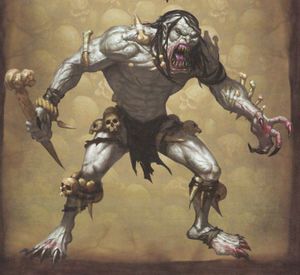 Gorgers are degenerate Ogres that inhabit warpstone tainted caverns below the tribes that spawned them. [2a]

When a scrawny Ogre is born, the tribe does not suffer the weakling to live. Those born with gangly limbs or without an Ogre's signature paunch are given over to a Butcher who takes them to the deepest cave near the campsite. This cave mouth is invariably sealed with a boulder of tremendous size, but when this hefty blocking device is rolled aside, the mewling newborn is then tossed into the gaping pit and the boulder heaved back into place once again. In Ogre society, weakness is a death warrant and by offering a sacrifice to the Great Maw, the tribe shows that it is strong. Ever since the Ogres migrated from the plains, stunted births have become common, and many offerings are cast into the darkness.[3a]

The caves of the Mountains of Mourn are home to many monstrosities and it would take extreme good luck for a full­ grown Ogre to survive for a week. Yet somehow, despite the dangers and the great odds against it, some of the under­sized Ogre whelplings live, such is their hopeless determination to cling to life. The few forsaken that survive their first few days begin to scrape out an existence in the darkness, scrabbling for sustenance and feeding on the base things that crawl in the dampness - rats, fang-leeches, crustworms and any scraps of carcass thrown into the interconnecting tunnels by other Ogres. Using stealth and savagery born of rock bottom desperation, a small handful of the aberrant infants eke out an unwholesome and troglodytic existence.[1a]

The tunnels below the Mountains of Mourn hold more secrets than just unwanted Ogre cast-offs. Unbeknown to any, save a few clans of ratmen, the under tunnels are laced with warpstone - the strange black or green-glowing rock that contaminates all it touches. Those Ogre spawn that live long enough learn to survive by snaking their emaciated frames into narrow crevices to avoid predators, which, naturally, include other Gorgers who think nothing about acts of cannibalism. The beasts are so hungry that they will gobble up anything they can scrounge, even the most tainted of things. This unnatural diet speeds their own mutations until the sinewy, filth-encrusted creatures twist and grow into something horrible - what Ogres know as a Gorger.[3a]

Even more ravenous than an Ogre, Gorgers are degenerate eating machines consisting of nothing but taut muscle, claws and ferocity. To aid a Gorger in its all-consuming quest to feed, it can distend his jaws in the same way as many serpents do in order to swallow larger prey. If that weren't enough, their mouths are crammed full of teeth that grow rapidly to push through their slimy gums, replacing themselves daily, or sometimes even more quickly. [2a]

Accustomed to the pitch black of underground, Gorgers use their flared nostrils to sniff out prey, which they will stalk relentlessly. Sometimes Gorgers unwittingly happen upon an entrance to other caves - perhaps Skaven tunnels or the workings of a Dwarf mine. The Gorger will drag itself through the smallest of openings in order to run amok in such a food rich environment. They will assail all they can find and the wet snapping sounds of broken remnants being devoured will echo down the hallways. Some Gorgers occasionally escape the underground labyrinths, scampering out when their pits are unblocked or finding new exits that lead outwards. There, in the dark, they will stalk the valley of the Mountains of Mourn, sniffing out and devouring the unwary, returning to their caves before daybreak.[3a]

When Ogres go to war, Ogre Tyrants unblock the tunnels and lure out Gorgers with carcasses. Gorger are either captured and dragged to battle in cages, or led in the right direction by a trail of blood-soaked flesh. Ogres often blindfold captured Gorgers before unleashing them, as the creatures's beady eyes are so unaccustomed to light they howl when exposed to the sun. Gorgers are so used to hunting in the dark that this blindness does not hamper their fighting abilities, as they scent the blood of the foe on the wind.[2a][3a]

With a profusion of razor-sharp teeth and scything claws, a Gorger attacks with a savage ferocity that frequently lops off heads and limbs, splattering gore and viscera in wide arcs.[2a][3a]