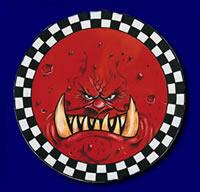 The gods Gork and Mork were respected and worshipped by all tribes of the Greenskins in the Warhammer World, until it's end.

Twin deities, Gork and Mork were distinguished by similar character traits. Gork was thought to be brutally cunning, whereas Mork was cunningly brutal. As far as all self-respecting Orcs and Goblins were concerned the twins embodied all necessary facets of live. This was reflected in their twin lores, the Lore of da Big Waaagh! and the Lore of da Little Waaaagh!, both lores calling on the powers of their deities to help them through boosting them in combat, aiding them in casting devastating spells, and even summoning their presence to the battlefield.

After a victory an Orc & Goblin army would often build crude effigies and idols of worship made from a wide range of materials, normally stone, wood, bone, or even dung.

The Forest Goblins were known to also worship the Spider.