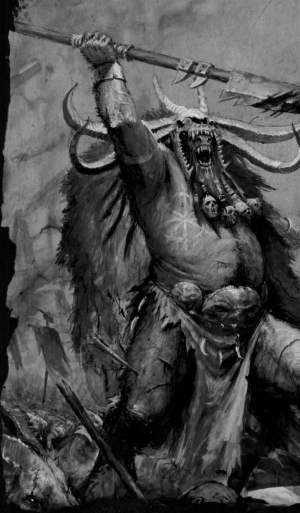 Gorthor the Cruel was the greatest Beast lord ever to have lived. [1]

Over one thousand years ago, his horde ravaged the Empire almost beyond recovery. His rune can still be seen carved into herdstones across the region. There have been many Beast lords who have united tribes into mighty invasions, but Gorthor was the greatest of his kind, for he possessed what so many others lacked: he had vision and the sheer animalistic will to sear it into the minds his followers.[1a]

Gorthor claimed that the Dark Gods had selected him as their emissary. Though he had no true magical powers, he had something of the shaman about him, often being visited by nightmare visions of the future. Such was his fervour in battle that he was sometimes cloaked by coronas of dark energy, which protected him or struck out at his foes, a sure sign to other Beastmen that the gods truly favoured him. With strength of arm and animal cunning, he united all the tribes of the Middle Mountains. [1a]

In 1520 IC, Gorthor recieved a vision of the world afire, a burning forest reaching into the skies, each tree trunk billowing smoke from the ruins of one of mankind’s once proud settlements. He bid his Bray Shamans summon all warherds across the Middle Mountains to create a brayherd large enough to consume the lands of men - quickly word spreads far and wide of the coming invasion and the ground would be forever tainted by the Beastmen encampments. [3a]

With such a large gathering, it was inevitable that other Beastlord's challenge him but he defeats them all, not even bothering to use his spear until the fifth stands before him. Beastmenhunt down many beasts to pull their chariots and soon the horder was ready. [3a]

When Gorthor left the Mountains it was at the head of the largest horde of beasts ever seen. Gorthor rode in a mighty chariot driven by his trusted retainer Bagrar, ensuring that all his followers could see him, and that he would be the first to shed the blood of the foe. Gorthor's own warherd thundered along beside him in chariots of their own pulled by all manner of vicious and unsightly monstrosities bound to Gorthor's will, and behind them swarmed a seething ocean of horns and hatred. [1a]

The vast brayherd first invades the territory of the Forest Goblin Warlord Bogri Eight-Eyes who swiftly offers his many armies in the hope of a share of the spoils, but Gorthor refuses and then leads a warherd entirely consisting of chariots into the heart of the Goblin horde. In response Spider Riders charge the Tuskgor and Razorgor Chariots but they are swept aside. Gorthor himself charges Bogri’s gigantic arachnid mount, ramming his chariot straight into the creature’s heart and impaling its master's skull with a single thrust of his spear. The remaining Goblins are culled mercilessly and the brayherd’s rampage continues on. [3a]

Bodies are heaped high and burnt as sacrifices to the Gods of Chao and as at the stroke of midnight, orgiastic revels reach their peak, the ground shakes to the tread of approaching Cygor. The myraid Beastmen lapse into a hallucinogenic fugue and have the vision of Gorthor burnt into their minds and before the fires have dimmed a clutch of Jabberslythes and Chaos Spawn shamble out from the woods to join the horde. [3a] He slew Kerranarash the Doombull to claim the Skull of Mugrar and defeated Gudrud Gutripper, claming his magic spear from the Orcs corpse. [1a].

Countless humans were killed and two entire provinces, Ostland and Hochland were brought to their knees. Mikael, the Elector Count of Hochland heavily fortifed his capital, Hergig and it took three weeks for the vast horde to fight their bloody way thorugh the outer defences. Finally they broke through but the battle continued as the castle itself came under seige. Then a large force of the Knights of the Blazing Sun, fresh from the Crusades arrived and cut a swathe through the beastmen. Count Mikael joined them with the remaining defenders and was engaged in combat by Gorthor. They fought for hours before the Runefang finally broke Impaler and Mikael cut down his enemy, causing the horde to break and flee. The victorious Mikael, mortally wounded, lived only a few minutes longer. [1a][3a]

Centuries after Gorthor's death the Middle Mountains are still home to some of the most savage tribes in all the land. No army of Men dare enter the range, so terrible is the legacy of Gorthor the Beastlord.[1a]