The Gotrek & Felix novels form a series telling the adventures of Gotrek Gurnisson, a Dwarf Slayer, and Felix Jaeger, his human companion. Gotrek is sworn to seek a glorious death in battle to atone for an unknown past sin; Felix, a well-off student poet fallen from grace, has has sworn to follow Gotrek and record his heroic exploits and death in an epic poem in gratitude for saving his life.

The first 7 novels of the series were written by William King. Nathan Long continued the series by writing books 8 - 12. Since then the series has become open with multiple authors contributing.

The series is comprised of the following books: 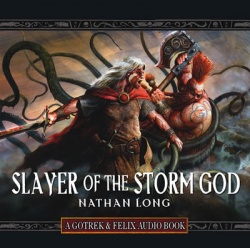 Slayers of the Storm God by Nathan Long.

Games Workshop has created three sets of miniatures of the two heroes. The latest is a diorama, and includes Snorri Nosebiter, Maximilian Schreiber, and Ulrika.