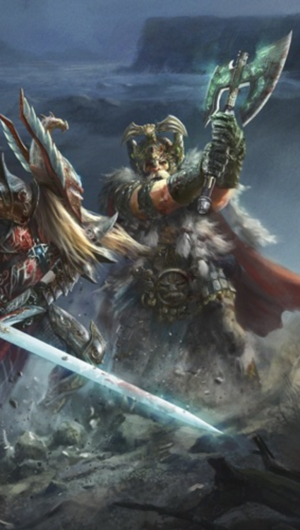 Gotrek Starbreaker was an ancient High King and former ruler of Karaz Ankor during the time known as the War of the Beard. [1a]

He is considered arguably the greatest Dwarf King of that age and a great warrior who personally slew Phoenix King Caledor II in combat. In his first years as High King, Gotrek went on a campaign to purge the Orcs of the Mountains and his war was considered a success. Later, along with his nephew Morgrim Elgidum, Gotrek led the Dwarfs during the War of the Beard. It is said that the High King held possession of the ancient warhammer Ghal Maraz, the same warhammer which would later be borne by Sigmar many years later.

Gotrek carried out a great purge of the greenskins and later as High King he had mediated many disputes between the other kings, including forging territorial agreements between the southern ad northern kings. [2a] He also fought King Huskarr of Karak Vlag to ensure his fealty. [2e]

He attempted to strengthen his alliance with King Grundin of Karak Kadrin, but Snorri refused to marry Grundin's daughter Helga. [2a]

As some kings grew restless regarding the elf presence on their borders, others grew rich and these formed new tensions between the rulers. At a Rinkkaz (a meeting of kings held every decade), he heard their complaints but decreed that there would be no war with elves to break the peace he had forged. [2a]

In a bid to cripple Ulthuan's military and economical relations with the Dwarfs, Malekith ordered Dark Elven assassins and warriors to attack and slaughter Dwarf trade caravans traveling around the Old World in the year -2005 IC. Believing these attacks to be perpetrated by the High Elves, many of the Dwarf Kings and Thanes began to ready themselves for conflict with the Elves.

As deaths began to mount, reprisals occured and tensions continued to rise until finally the Runelord Agrin Fireheart was killed in a ambush. [2f] When Gotrek heard the terrible news, he expelled the elf Ambassador Imladrik from his court whilst he and the other kings decided on their response. [2f] Debate raged with many calling for immediate war, and although word was sent by Imladrik that the attacks were the work of the Druchii, few believed this - another elf race that they had heard nothing of before. When Gotrek refused to declare all out war between the two peoples, he was challenged by King Varnuf of Eight Peaks. The High King was quick to respond and in the ensuing trombaraki Gotrek was the victor and decreed that all trade would cease with the elves, and any elves found within dawi lands would be considered trespassers. [2g]

Like his predecessor, Gotrek was a wise and thoughtful king and instead of heeding the call for war and after several years of growing tension and deaths on both sides, Gotrek sent one last attempt of reconciliation.[1a][2i]

The Dwarf people were a grim and straight-foward race, and once the Dwarf ambassador, Forek Grimbok[2i] cousin of the High King reached the throne of Phoenix King Caledor II, son of Caledor the Conqueror, the Dwarf ambassador harshly demanded the Elves to find accountability for these atrocities. But the Elves of that time were arrogant and prideful, and scorned by the Dwarf's accusation, the Phoenix King deliberately conceived an insult so grievous that no amount of gold could ever serve to recompensate. The Elves forcefully restrained the Dwarf and slowly cut-off his beard, compelling the Dwarf to go home scorn of pride and bearing the message that the only way the High King will gain a single gold coin of compromise is if he goes personally to Ulthuan and begged before the Phoenix King himself. This became the greatest insult ever recorded upon the Book of Grudges, which would accumulate into the greatest war ever fought between the two races. [2k]

The War of Vengeance

Enraged beyond reason or thought, the High King roared for his kings and thanes to gather their armies and prepare for war. Nearly ever Dwarf clan was called up for this conflict, with each stronghold mustering armies numbering in the tens of thousands unto the growing legions of throngs already under Gotrek's command. At the very height of their power, the Dwarfs marched to war with a massive horde of heavily armored warriors in what the humans thousands of year from now would begun to call the War of the Ancients, but to the Dwarf they knew it simply as the War of Vengeance, and to the Elves as the War of the Beard. With the entire military might under his control, the High King led the Dwarfs unto the lowlands and attacked the unsuspecting Elven colonies that were oblivious to the Phoenix King's actions. Colony after colony had fallen under the Dwarfs brutal assault until finally Caledor II ordered a mass mobilization of his forces and ignorantly emptied Ulthuan of all her soldiers leaving it entirely defenseless, a situation that Malekith had long anticipated and would soon exploit. The massive Elven fleet set sail with Caledor at its fore and made landfall upon the Port-city of Tor Alessi, where they repelled the Dwarf invaders from the city walls.[1a]

This marked the first true engagement fought between the two civilizations that would last for nearly 400 years. Blinded by their rage and overconfidence, the sudden arrival of Ulthuan's entire military caught the Dwarfs by surprise. Pushed back, the Dwarfs and Elves continued their battles within many area's of the Old World, the most prominent of which took place within the lands of Bretonnia. As the war began to escalate ever further, by the year -1974 IC, Caledor II was able to slay Prince Snorri Halfhand, son of the High King in single combat. The death of his son ensured that Gotrek would never stop until Caledor was dead. In an act of vengeance for his lost kin, Thane Morgrim Bargrum, cousin of Snorri and nephew to the High King, led a Dwarf army against the Elves, forcing them to retreat back until they made a final stand at the Battle of Oeragor, where he and his army purposefully stood before the arrow storms of the Elven army as an act of defiance and courage.[1a]

With their arrows spent, the Elves foolishly attacked the Dwarfs in melee combat, where the Dwarfs quickly gained the advantage. In battles end, Morgrim personally slew Prince Imladrik in single combat, earning him the title of "Elgidum" (translated as "Elfdoom"). Crowned a hero by his people, Morgrim continued to capture many Elven towns and cities across the Old World, the most prominent of which was the razing of Athe Maraya in the year -1948 IC. Another mighty Dwarf leader by the name of Brok Stonefist lead the armies of Karak Azgul in a decisive campaign against the Elves by using his extensive knowledge of the tunnels to route their armies. For his heroic deeds, he was named "Ungdrin Ankor Rik", or "Lord of the Tunnels" by his people.

As the war dragged on, he met his greatest adversary, Lord Saledor of Tor Arche, and for the next hundred years he fought Saledor's armys in many battles such as the Battle of Blind River. Finally, it was during the Battle of Athel Maraya that the two adversaries found their ends in single combat, where they fought each other until finally the burning city devoured them both.

In a final push to end the war, High King Gotrek led his throng to drive the Elves back, besieging the wall city of Tor Alessi for the fourteenth and final time. At last, the walls were breached and, unable to flee, Caledor II was forced to face Gotrek in single combat. The duel that followed lasted for hours, but as the Elf King's fortitude failed, Gotrek shattered his foe's sword with a well-placed hammer blow. Defeated and disarmed, Caledor pleaded for mercy and forgiveness, but all hope of forgiveness was shattered the day Caledor killed the High King's son. Hardening his heart, the High King swung his hammer and killed the Phoenix King.

In the aftermath, King Gotrek picked up the Phoenix Crown from the mutilated corpse and proclaimed the grudge settled, and that the Elves were welcome to come to Karaz-a-Karak to beg for the crowns return. The remaining Elven forces withdrew from the Old World, their armies, like their arrogance, shattered in defeat. In their pride, the Elves have decided to do one last suicidal assault upon the walls of Karaz-a-Karak.

Suddenly however, news began to stream into the remaining Elven Lords that Malekith had once more invaded the Island of Ulthuan with one of the largest Dark Elven invasion fleets to that date. Swallowing their pride, the Elven Lords began a mass evacuation of all Elven citizens from all the colonies and gathered their forces to repel the Dark Elven invasion. The Dwarfs rightfully considered themselves the victors of the War of Vengeance, as their foes had departed, driven from the very continent. This hard-won situation should have ensured the Dwarfen dominion over the Old World for ages to come, however in their arrogance the Dwarf were fully unprepared for the catastrophe that is soon to come.