From Warhammer - The Old World - Lexicanum
(Redirected from Gotrek and Felix)
Jump to: navigation, search 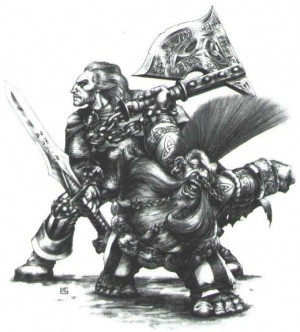 The Slayer Gotrek Gurnisson and his human companion Felix Jaeger

This article is about the heroic exploits of the two ever-wandering heroes. You may be searching for the novels: Gotrek & Felix (novel series).

Gotrek Gurnisson and Felix Jaeger are two famous adventurers and heroes. Gotrek is an extremely powerful Slayer who travels through the Warhammer world seeking a heroic death. Felix is his traveling companion, having sworn an oath in Altdorf to record Gotrek's doom.

Together they have crushed groups of aggressive mutants, exposed many Chaos cults, fought against several warbands of Orcs and Goblins, and vanquished several hordes of Skaven, besides slaying powerful monsters like Trolls, a Dragon, a Bloodthirster and a Giant. They are also responsible for the sinking of a Black Ark.

After Gotrek and Felix parted ways, Felix published his memoirs, "My Travels with Gotrek".

It's reported that Gotrek, Josef Bugman and Grombrindal appeared during a nearly lost battle in the ruins of Karak Varn where they saved the day for the Dwarfs. While celebrating the victory they swore that they would come back and save their Dwarf brothers again if there was real need. In this case the three heroes would fight like one and Gotrek and Josef would serve Grombrindal as shieldbearers. Because of the strong and individual character of each Dwarf Grombrindal's wisdom of age will not dominate the trio all the time: sometimes Josef Bugman may decide that it was time for a little break and a mug of ale to regenerate their energies, or Gotrek may run wild because of his unfulfilled slayer oath and start attacking the mightiest enemy he will find.[17]

Games Workshop has produced three different miniatures of Gotrek Gurnisson: Two for use in Tabletop-Games and a larger Collector's Miniature. For the 30th anniversary of White Dwarf magazine the special trio of Grombrindal, the White Dwarf, with Gotrek and Josef Bugman, serving as shieldbearers, was created by Aly Morrison as a Limited Edition miniature.