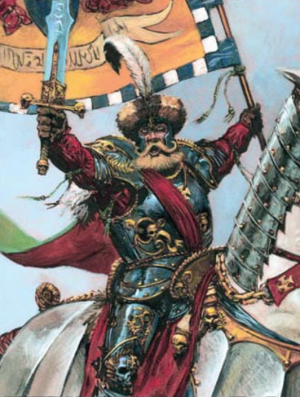 An Empire Grand Master mustering his men for war.

Empire Grand Masters are the highest ranking Knight within a Knightly Order, and is typically a warrior and leader of his own Chapter of Imperial Knights.

Grandmaster is a warrior and leader of unparalleled valor, having fought in dozens of battles and whose military prowess is beyond question. An Elector Count can request that a Knightly Order fight alongside his army, but the decision to ride out lies solely with the Grand Master himself. This makes the Grand Master a very powerful individual within the Empire, a power that is equal to an Empire General. When an Elector Count petitions a Knightly Order for aid, it is sometimes a condition that the Grand Master himself takes command of the army. Most Elector Counts are only too happy for a general of such superlative ability to lead his troops into battle.