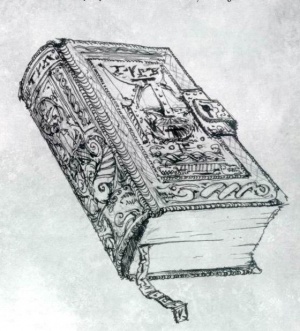 The Great Book of Grudges (Dammaz Kron in Khazalid) is an ancient book passed down through the ages from one High King of the Dwarfs to the next. It is currently held by the reigning High King, Thorgrim Grudgebearer. The Great Book of Grudges is essentially a record of all the terrible wrongs and treacherous deeds ever perpetrated against the Dwarf race. The book is written in the blood of High-Kings and only they have the authority to add new grudges or strike out grudges that have been avenged. Essentially, the Book of Grudges amounts to a very detailed recorded history of the Dwarfs. Being a symbol of the absolute lordship of the Dwarf High-Kings, it is kept secret from the eyes of other races. In fact, few members of the outside world have even seen the tome, save for a small number of scribes from the Empire, only allowed access because of the longstanding alliance between the Empire and the Dwarfs.

Apparently, the individual who has earned the most entries in the book of grudges is Skarsnik, the infamous Night Goblin warlord and self-styled Lord of the Eight Peaks.