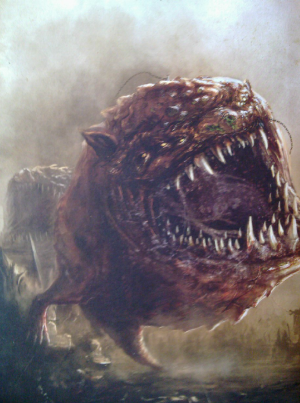 The Great Cave Squig is a larger variant of the more common Cave Squig that has grown to such a magnificent size that it has become as large as an Imperial warhorse.

The fangs of these beast are as sharp as swords and their ravenous appetite would often mean they will snap at anything that moves in front of them. Their hides are tough and leathery and their small eyes gleam with an endless desire for meat and carnage. As one might expect, these powerful Squigs are greatly prized by many Night Goblin tribes, however due to their rarity and vicious behavior, they are not as common within a battlefield.[1]

As Great Cave Squigs are ridiculously dangerous to capture, to ride such a beast into battle is considered quite an achievement for even the toughest Night Goblin Warboss. The process of breaking in a Great Cave Squig would cost the lives of many Night Goblin, but once the beast learns to accept a rider, they serve as a more stable mount than the more smaller and unruly Cave Squig. This allows a rider a free hand to fight in close combat, instead of just hanging on for dear life. When grouped with Squig Hoppers, a Great Cave Squig will always be the ones who leads the pack. Although they are costly to maintain, eating over twice their own body weight daily, a Night Goblin Warboss would do almost anything to keep such a magnificent asset in the hands of his tribe.[1]

On the even rarer occasions when a Great Cave Squig continuous to grow exponentially, they would grow to such a monstrous size that they are once again categorized into another even larger variant called simple as the Colossal Squig.[1]