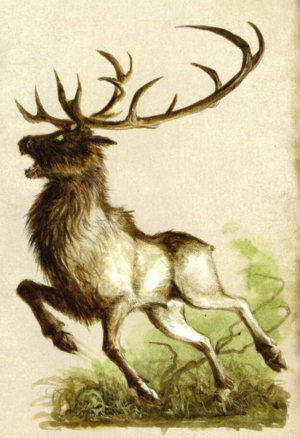 Great Stags are magical beasts that are closely connected to the most ancient of forests and the god Taal. [3a]

It is said that when a Great Stag emerges from its dark arboreal shelter, great deeds are at hand. Thus, in a great many lands, the appearance of a Great Stag is thought to signal the onset of portentous times. This has led many an unscrupulous wizard to bind a Great Stag to their will purely as a means of gathering wealth and support from their more credulous allies. That such plans inevitably backfire in a spectacularly gory fashion — the Great Stag invariably chafes at servitude to an unrighteous master, and will likely trample the fool to death the moment the spell lapses — seems to serve as little warning to the next charlatan.[1]

There is no chance of mistaking a Great Stag for any of the lesser herd beasts that roam the forests of the world. It is a powerfully built animal, whose every snorting breath releases plumes of steam. The antlers of the Great Stag are both formidable and impressive and about whose iron-hard points dances a ghostly nimbus of magic. However, what is most remarkable about a Great Stag is its noble presence; the creature moves with on unsurpassed grace, for it is a king amongst beasts and the natural spirit of the world made manifest. Such a creature can be tamed for brief periods, perhaps, but never truly mastered. Only when the Winds of Magic blow strong will such a proud beast ever answer a wizard's summons.[1]

Rarely, perhaps once or twice in a generation, a Great Stag may allow itself to be the steed of a courageous or noble Wood Elf. [2a]

The Eonir consider them the children of the god and transcendent, magical creatures, They claim that their breath is like a distant song rising as steam; their footprints fill with budding flowers and all other animals fall silent and bow their heads in reverence. [3a]

A sacred beast to the Cult, priests of Taal state that their god was so impressed with the spirit of the first Great Stags that he gave them antlers to match his own. [3a]