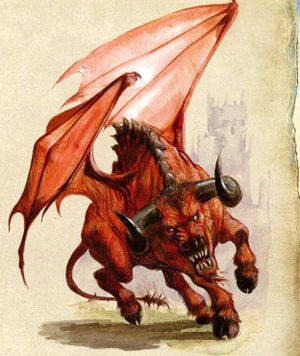 The Great Taurus are flying creatures of pure rage, manifesting itself in the form of a red, winged bull wreathed in flames and smoke. [1][3a]

The mightest of their kind are known as Bale Taurus and are immortal, being unable to die unless by violence. [3a]

The powerful and strangely charasmatic Lammasu is thought to be a rare mutation of the Great Taurus. [4a]

They reign supreme in the ashen wastes of the Dark Lands where they must battle Dragons, Goblins, Ogres Orcs, Trolls and Wyverns. Unless the Winds of Magic are blowing unsually strongly they seldom stray far from this region as is suffused by the Wind of Aqshy. [4a]

Chaos Dwarfs legends say that they were once people of their race mutated in living bull-furnaces to serve the god Hashut and call them the Red Bulls of Hashut. They stable them beneath the great temple to the god in Zharr-Naggrund and powerful Chaos Dwarfs are hence able to ride them into battle. [2a]

Another legend is that (unknown) gods originally sent the Great Taurus as a punishment for a terrible transgression that occurred in the heart of a once-fertile land. It is said that the inhabitants had begun to worship the Ruinous Powers, hurling those who would not give up their faith into an active caldera. The volcano then erupted laying waste to the land for hundreds of miles and from this inferno emerged the first Great Taurus to hunt down any survivors. [5a]

The fire they breathe is hot enough to melt iron, and enemy weapons instantly soften and blunt as their wielders are about to deliver the blow. When its rage reaches its peak, the flames burst out of its throat and eyes, which usually resolves with the creature smashing its way into a large regiment.[1] Its hide is bright red, flickering with sparks and is thick enough to resist heavy blows. [2a]