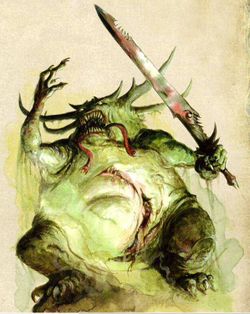 Great Unclean Ones are Greater Daemons of Nurgle, the Lord of Decay. [3a][6a]

Each appear much like their creator and god and also have similar personalities and although many are called Nurgle they have their own daemonic name. [2a]

They appear as large bloated creatures, oozing pus and revealing diseased organs through their ragged skin. They are often accompanied by Nurglings, who gaggle about the Great Unclean One's feet, nibbling on whatever carrion he may discard as he advances. [2a] Other Nurglings burst from its inards where they suck and chew on the juices within. The Daemon is despicably tough, from being both large in stature, as well as numb to pain through aeons of disease. [6a]

Great Unclean Ones spread pestilence and rot wherever they go, blistering the lungs of their foes and throwing disease about on a whim. These Greater Daemons are canny sorcerers and use dark magic to further spread the taint.[3a]

They are not however morbid - quite the opposite, each one being motivated by human like enthusiasm and often have a gregarious, even sentimental nature often refering to their followers and minions as their Children. [2a] However they can be roused to great anger if the schemes and plagues of Nurgle are thwarted by his enemies. [3a][6a]

Some travel in great caravans full of pestilence and daemons bustling and full of plans. [2a]

All Great Unclean Ones vie for the attention of their beloved Plaguefather, attmepting to suprass their peers in spreading pestilent blessings. However acomplishment is not enough - they must also do so in the most ebullient of moods. [1a]

Those that are granted the favour of the Master of the Garden of Blight have a draught of mouldering elixir from the gods cauldron, growing in size and power. such is their vast mass that they require equally large quantities of magic to sustain them in the mortal world. [1a]

Great Unclean Ones are often powerful wizards. [6a]

Great Unclean Ones carry immense rusty blades, capable of infecting whomever it slices. Often they also carry flails, made of rusty chains and skulls of those, who died through their diseases. [6a]

Non magical weapons that strike a Great Unclean One will often rust away and those daring to fight one risk contracting Nurgles Rot. Many also have various Chaos Attributes [2a]

The leftmost model was created using miniatures from 3rd/4th Edition and doesn't conform to any rules, because Great Unclean Ones aren't allowed to ride on Chariots.