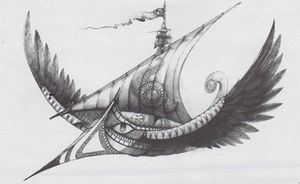 Great Winged Terrors are strange magical ships that float above the waves and are used by Tzeentch worshipping Warriors of Chaos in Chaos Fleets. [1a]

They sometimes spend hours hanging motionless only to then accelerate to incredable speeds and fly across the waves to engage the enemy. Great Winged Terrors are difficult opponents to face for not only is their movement unpredictable but they can heal themselves with magical enegery. Should they be defeated they explode in a flare of light, leaving no trace of their existance and even captured vessels simply vanish, leaving their captors to fall into the sea. [1a]

Magical energy plays across their hull and wings arcing out as Bolts of Tzeentch. [1a]