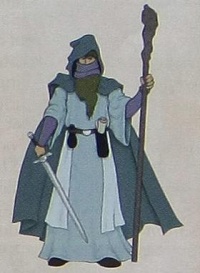 A wizard of the Grey Order

The Grey Order is one of the eight Colleges of Magic who train Wizards in The Empire. Grey wizards are mobile people who tend not to stay in any one area for a long period of time. They avoid towns and cities as much as possible as they have a mostly warranted reputation with imperial citizens as devious and dishonest. This is mostly due to the way that Grey wizards are prone to imply that they have some form of sinister hidden agenda. As a result Grey wizards are solitary individuals spending little time with other humans outside the magical circles. The Order's centre in Altdorf is a run-down stone building in the cities poorest back alleys. The Lore of Magic they study is the Lore of Shadow.