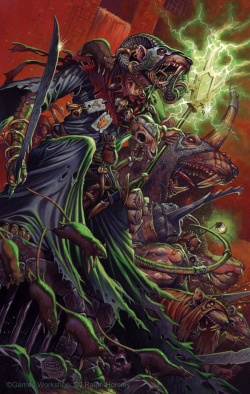 Thanquol is an ambitious, ruthless, and cunning Grey Seer of the Skaven with a gift for avoiding death.[2a]

He has travelled across much of the world including Cathay, Lustria, and the Southlands and led armies against the armies of many races, often being successful although usually at a very heavy cost to the Skaven forces under his command.[2a]

Though a powerful sorcerer with great and malicious ambitions, Thanquol tends to leave his plans in the paws of less capable underlings and consistently underestimates his foes, flaws which hamper his desire to rise through the ranks of skaven society. The invasion of Nuln in 2499 IC[2a] which he oversaw ultimately ended in failure due to a number of factors, including the mutation of a Clan Pestilens plague causing it to affect skaven as well as humans, the unstoppable spread of rats specifically bred to devour all available foodstuffs, and the interference of Gotrek and Felix. Despite managing to penetrate Nuln's palace with a company of stormvermin, Thanquol was prevented from murdering Countess Emmanuelle von Liebwitz and fled in his defeat, justifying his cowardice as prudent skaven caution.

Soon after first encountering them, Thanquol began to regard Gotrek and Felix as his arch-enemies, seeing them as near-demonic agents of a malign power sent to foil his otherwise perfect plans. However, his many attempts to have them killed have all ended in failure. Despite the threat he poses, the duo were for a long time far less aware of him than he was of them, knowing him only as a shadowy figure controlling the skaven. As such, Thanquol was surprised and infuriated when, upon finally capturing the pair, his declaration that their long rivalry was about to end was met with blank confusion, Felix having assumed that the Grey Seer he had once clashed with was long dead. Nevertheless, Thanquol's murder of Felix's father, Gustav Jaeger, did eventually make him the hated nemesis that he always believed he was. Felix has sworn to avenge himself on Thanquol for his father's death, just as the loss of his hand has made the fires of Thanquol's hatred for the pair burn even brighter.