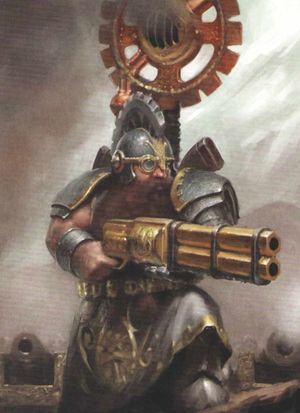 Grimm Burloksson is the youngest Dwarf ever to become a Dwarf Master Engineer. [1a]

He is the son of Guildmaster Burlok Damminsson and quickly proved to be a skilled inventor and engineer, even as a beardling. Whilst other Guildmasters did concede his skill, they were dismayed that he did not seem to value the ancient laws as he should do. [1a]

In his youth he created a steam-powered beard-braider, a double-barrelled rifle and self-lighting pipe. His battle helm is worn with a telescopic sight and his modified crossbow bolts and enhanced black powder is highly valued. Finally, like his father he has a steam-powered gauntlet. [1a]