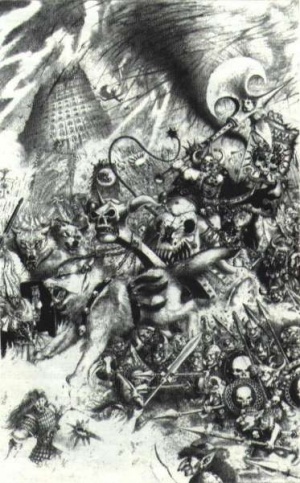 Grom the Paunch of Misty Mountain

Grom the Paunch of Misty Mountain, often referred to as Grom the Fat, was the most powerful Goblin Warboss to have ever lived. [2a]

Although most Whaaagh!s are commonly led by Orcs, Grom was to prove exception. Grom was extremely large for a Goblin. While nowhere as tall as an Orc, Grom was immensly fat and strong and became known as the largest Goblin ever. [2a]

He famously ate a meal of Troll-meat. This act not only gave him life-long indigestion and terrible flatulence but also granted him some regenerative abilities. For much of his early career, Grom led his Broken Axe tribe first conquering the tribes around and under Thunder Mountain and then across the Badlands and the southern Worlds Edge Mountains, conquering with Greenskin tribes they came across. [2a]

Then Grom attacked the Dwarfs of Karak Kadrin and after that the Empire. He looted and pillaged Averheim, then crossed the Reik and destroyed the imperial capital of Nuln. Later defeated by the Prince of Altdorf, he turned north and laid siege to the city of Middenheim and defeated the army of Middenland. Worried by his fellow Greenskins, who weren't able to sack the city, he crushed the gates with his enormous axe Elf-Biter and constructed his infamous chariot from the remnants of a smaller, wooden temple of Ulric.

After that he came to the Sea of Claws where he ordered the construction of a fleet of ships to transport his horde of some forty thousand Goblins. With that he confronted the Imperial Fleet in a naval battle before he and his horde set sail for Ulthuan. He would be the first (and only) only goblin warlord to have ever successfully invaded the fabled island of Ulthuan, home of the High Elves. [1][2a]

Half of his army died on the voyage, drowning, beaing eaten by their comrades or sea life, but the remainder he led on a rampage through Ulthuan. His shaman Black Tooth began to draw huge amounts of power from the Elf Waystones and together they sacked Athel Tamarha before laying siege to Tor Yvresse itself. Only the intervention of the hero Eltharion and his fleet stopped the rampage, also slaying Black Tooth and causing the goblins to break and flee. [2a]

Grom himself was never found but became a legend amongst both Orcs and Goblins alike. [2a]