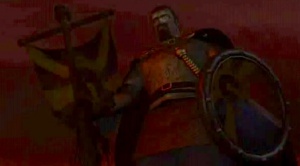 Commander Morgan Bernhardt leads a mercenary army called "The Grudgebringers", named after his magical sword, the Grudgebringer, which can unleash fireballs.

The army has contained many more units that have come and gone over time for pay, or for joint purpose, including Carlssons Cavalry from the Border Princes, Urblab Rotgut's Merecenary Ogres from Ostland, Wood Elves, Bretonnians, Outlaw bandits and many, many Imperial troops.

The Shadow of the Horned Rat

Bernhardt and his army defeated Grey Seer Thanquol in a plot to use ancient Elven stones to destroy the lands of men.

During this time The Grudgebringers were joined by[2]:

Under orders from the Emperor Karl Franz Bernhardt quelled an invasion of Orcs and Undead into the Old World by destroying the Dread King. Whilst a mercenary, Bernhardt was loyal to the Empire. In this campaign Bernhardt was joined by many others[1]: