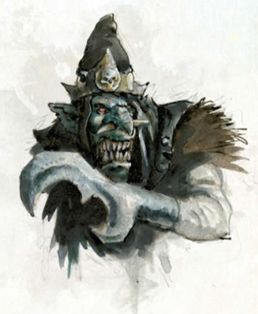 The King of Skull Chasm.

Grulsik Moonclaw was the epitome of a Night Goblin warlord: ambitious, cut-throat, aggressive – and quick to flee should he suddenly find himself losing. A loud and boisterous leader of the Moonclaw Tribe, Grulsik used his bellowing voice and bold commands to rally a disordered mass of tribes into a single great horde. In doing so he became the self-proclaimed King of Skull Chasm. That his reign only lasted hours in no way diminished the fearful respect he earned from not just his own tribe, but also his rivals. Aided by his gathered trio of power-mad shamans and his own disregard for danger, Grulsik was close to becoming a living legend amongst his kind.[1]